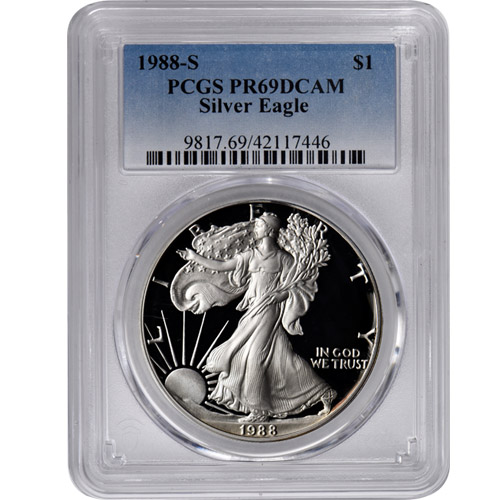 The debut of the Proof Silver American Eagle in 1986 resulted in massive demand for the coin in the Proof Series, with a major surge through the first two years in the BU Series. In fact, the 1986 Proof Silver Eagle remains the highest minted as of 2021 with a total of 1.446 million coins. The next closest coin was the 2006 20th-anniversary release, and it still fell short of that mark by 400,000 coins. Just two years after the debut of the series in 1986, demand had fallen to the point that the 1988 coin set a then-low-mintage of just over 557,000 coins. This remains the eighth-lowest mintage as of 2021.

All of these 1988-S 1 oz Proof Silver American Eagles are available to you with a near-perfect certification. The PR69 grade from the PCGS indicates a coin that has full, original mint luster, but also presents with a maximum of two minor detracting flaws. Those detractions are limited in nature to minuscule contact marks or hairlines and must be found outside of the primary focal points of the coin.

Walking Liberty features on the obverse side of 1988-S 1 oz Proof Silver American Eagles. Created in 1916, this vision shows Liberty walking toward the sun with her right hand outstretched, her left hand carrying branches of oak and laurel, and the American flag draped around her figure.

The heraldic eagle of the United States is found on the reverse of the 1988-S Proof Silver Eagle. This iconic design was created in 1986 by John Mercanti as a modernized version of an image that dates back to 1795 and the very first coins issued by the US Mint.

Please contact Silver.com if you have any questions about these coins. You can call us at 888-989-7223, chat with us live online, or simply send us an email.