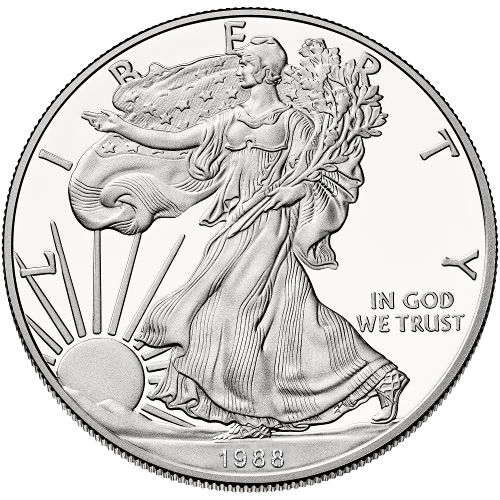 With passage of the Liberty Coin Act of 1985, the United States Congress established an official silver bullion coin for the country. Struck using only silver sourced from within the US, the Silver American Eagle debuted in 1986 to immense demand from a precious metals industry clamoring for more silver bullion coin options. Today, the 1988-S Proof Silver American Eagle coin is available on Silver.com.

Between 1988 and 1999, production of Silver American Eagle coins as a whole (both bullion and proof) would hit a low of 4.1 million and a high of 7.9 million. During this 12-year production run, the coins would go up and down numerous times. The first of these upward trends started in 1988, and lasted through 1991.

US Mint Chief Engraver John Mercanti assumed that role in 1986, creating a modern version of the nation’s heraldic eagle for the Silver American Eagle coin as his first major project. Mercanti’s design continues as the reverse design on the coin, though he retired from the position in 2010.

Silver American Eagle coins, both bullion and proof, were produced at the San Francisco Mint during the program’s early years. Eventually both coins would shift to different mints for production.

Please feel free to contact Silver.com at 888-989-7223 with any questions. You can also reach us online using our live chat and email features.