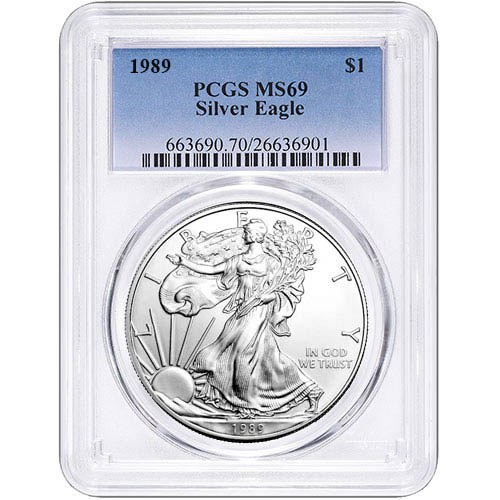 The Silver American Eagle closed out the 1980s with a slight uptick in the demand for silver bullion coins. The mintage figure increased by a modest 200,000 coins compared to the year before, and though it represented an increase it was the first in a three-year run of upward coining. Now, 1989 1 oz Silver American Eagle Coins are available to you for purchase online at Silver.com in near-perfect condition.

Silver American Eagle coins have seen countless ups and downs throughout four decades of production. The coins settled into a range of around 4.5 to 5.5 million per year through the late 1980s and most of the 1990s. The only exceptions during this period were the 1989 and 1990 coins.

The final mintage of the 1989 1 oz Silver American Eagle coins was 5,203,327 coins. This was a slight increase over 1988 and the first in three years of growing demand through 1991 when 7.1 million coins were sold. Throughout 1989, the price of silver per ounce averaged $5.51. This was down from the previous year but in line with the average from other years earlier in the 1980s.

On the obverse side of 1989 1 oz Silver Eagles is Walking Liberty. Created by Adolph A. Weinman, this design originally featured on the Walking Liberty Half Dollar from 1916 to 1947 and depicts Liberty in left-profile relief as she walks toward the sun on the horizon.

The reverse face of 1989 Silver American Eagle Coins features the heraldic eagle of the United States. The design featured on the Silver Eagle coin was modernized in 1986 by John Mercanti, the man who would go on to serve as the 12th Chief Engraver of the United States Mint from 2006 to 2010.

These 1989 1 oz Silver American Eagle Coins feature Mint State 69 certifications. Considered near-perfect specimens, the coins have full, original mint luster with a maximum of two minor detracting flaws. These flaws are limited in nature to minuscule contact marks or hairlines and limited in scope to the areas outside the primary focal points of the coin.

We encourage Silver.com customers to reach out to us at 888-989-7223. You can also connect with us online using our live chat and email address.