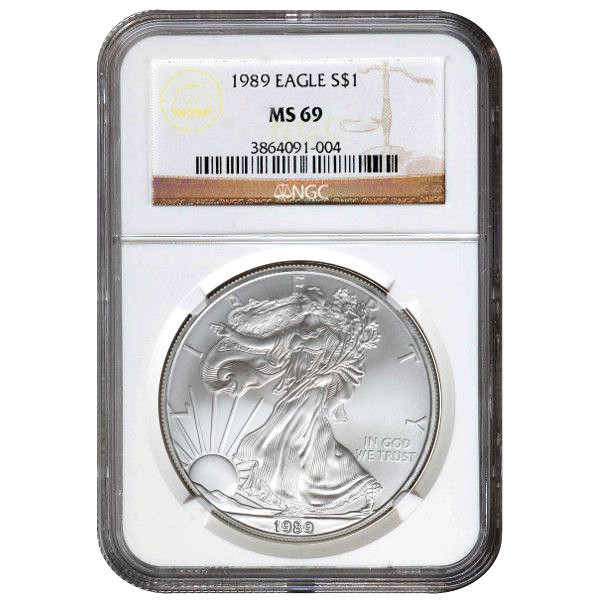 Silver American Eagle coins are sought after by millions of investors and collectors around the globe. The most popular coin in the world, the Silver Eagle is the official silver bullion coin of the United States and is produced by the US Mint on an annual basis. Today, you can purchase this 1989 American Silver Eagle NGC MS69 from Silver.com.

The Silver American Eagle coin program consists of bullion, proof, and burnished (or uncirculated) coins. The bullion and proof coins were introduced in 1986, while the burnished coin was not introduced until 2006 for the 20th anniversary of the coin program.

A coin with an MS69 grade from the NGC is considered to be in near-perfect condition. The coins in this product listing still have their original luster for the date and mint, with no more than two detracting marks. The flaws are considered minor and are not visible within the primary visual areas of the coin’s surface.

On the obverse side is the image of Lady Liberty walking toward the setting sun. With one hand outstretched and the American flag over her shoulders, Walking Liberty represents America’s constant march toward a brighter future.

The heraldic eagle featured on the reverse side depicts a bald eagle behind a shield, clutching arrows in one talon and an olive branch in the other. These symbols represent the nation’s desire for peace, but its preparedness for war. The year of minting is always featured on the obverse side, while the coin’s weight, purity, metal content, and face value are inscribed on the reverse.

Silver.com welcomes your questions regarding NGC Graded Silver American Eagles. You can direct your inquiries to one of our associates on the phone at 888-989-7223, via our web chat, or through email. 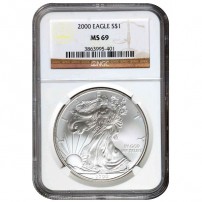