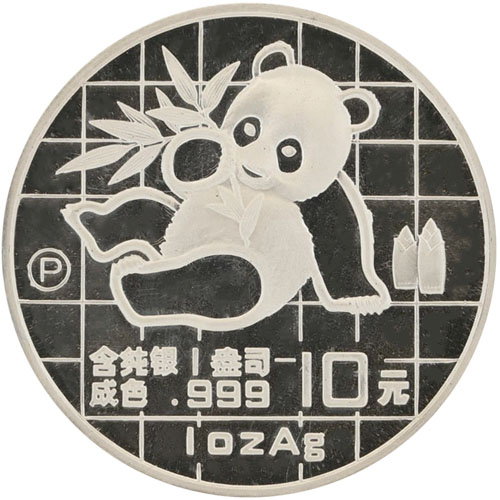 The Silver Chinese Panda coins are the official bullion offering of the People’s Republic of China. Introduced in 1983, the Silver Panda was initially offered only as a proof coin with new designs on the obverse each year. In 1989, the Chinese Mint began to regularly produce bullion coins in addition to the existing proof options. Right now, 1989 1 oz Silver Chinese Panda Coins are available to purchase online at Silver.com.

Each of the 1989 1 oz Silver Chinese Panda Coins available to you in this listing comes with its original packaging. Each of the coins is available sealed inside of a protective capsule to ensure the coin’s condition.

The 1983 debut of the Silver Panda Series included only 1 oz Proof Silver Panda coins. For the first several years, the Chinese Mint restricted the mintage of the proof coins to 10,000 per year. These early coins also featured .900 silver content. The 1989 1 oz Silver Chinese Panda Coin features .999 fine silver content and was the first coin in the series to include this level of purity.

Silver Chinese Panda coins are known for the use of new obverse designs each year. The image of the Giant Panda used on the obverse of the Silver Panda coins is changed with each passing year by the Chinese Mint, with only the 2001 and 2002 coins sharing the same design.

On the obverse of the 1989 1 oz Silver Chinese Panda Coin, you’ll find the image of one panda as it sits on its backside while clutching a branch of bamboo. This side of the coin includes engravings of the weight, metal content, purity, and face value.

The reverse of all Silver Chinese Panda Coins features the Hall of Prayer for Abundant Harvests. This structure is part of the Temple of Heaven complex which was constructed in Beijing between 1406 and 1420.

The Chinese Mint produces all Silver Chinese Panda coins for the People’s Republic of China. The mint has several locations throughout the country, including facilities in Shanghai, Shenyang, and Shenzhen.