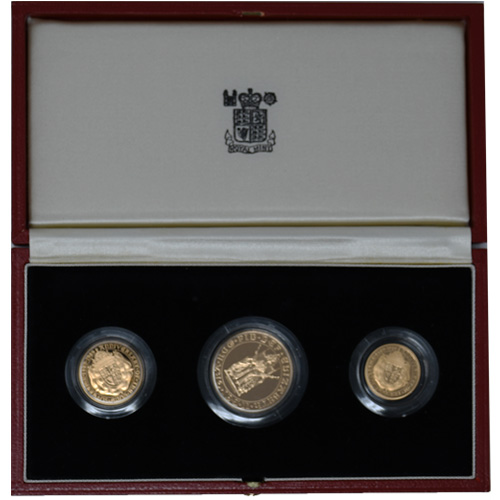 One of the earliest English gold coins issued was the sovereign. This gold coinage came from the era of the Tudor Dynasty and reflected images of the Royal Arms, the Tudor double rose, and the reigning monarch of the day. In 1989, the Royal Mint marked the 500th anniversary of the sovereign with a three-coin Gold Great Britain Sovereign issue. Today, 1989 Proof Gold Great Britain Sovereign 3-Coin Sets are available to you online at Silver.com.

The 1989 three-coin set available here marks the 500th anniversary of the first sovereign coins from the Kingdom of England. The concept of the sovereign was introduced by King Henry VII in 1489, not long after he established the House of Tudor and took control of the throne of England. The common design concept of the Tudor sovereigns used over the next century-plus is replicated with modern visuals on the three coins in this Gold Great Britain Sovereign Set.

All of the 1989 Proof Gold Great Britain Sovereign 3-Coin Sets available here come with, as the title suggests, three coins. In this set are the Double Sovereign, Sovereign, and Half Sovereign coins, all with dual dates of 1489 and 1989. The coins are all 22-karat gold specimens with 91.67% gold content per coin for a total of .8234 Troy ounces of 22-karat gold. The coins are housed together in a commemorative display and boast frosted designs with mirror-like fields.

On the obverse of each coin in the 1989 Proof Gold Sovereign 3-Coin Set is Queen Elizabeth II. Borrowing from the style of the Tudor sovereigns, this design shows the Queen seated on a throne in royal robes with an Imperial Crown upon her head. This front-facing relief reflects how the Tudor monarchs were depicted on original gold sovereigns.

The reverse side of 1989 Proof Gold Great Britain Sovereigns in this 3-Coin Set includes the modern Royal Arms backed by the Tudor rose. The Tudor rose was a double rose of white and red, reflecting the House of York and House of Lancaster that Henry Tudor merged when he married Elizabeth of York and founded the House of Tudor. The modern Royal Arms features a quartered shield.

Please contact Silver.com if you have any questions when you buy gold. You can call 888-989-7223, chat with us live online, or email us directly.