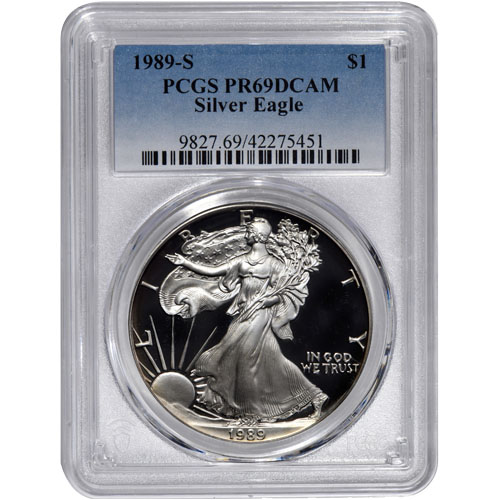 The 1989 Proof Silver Eagles from the United States Mint marked the end of the opening era of production for the series. The coins of the 1980s enjoyed interest and demand that the 1990s would not see for the program. The age of the coins released in this early era of the series are surprisingly hard to come by, particularly as certified specimens, largely due to the fact that the original collectors have not resold the coins at any point. Right now, 1989-S 1 oz Proof Silver American Eagles are available to purchase online at Silver.com.

Each 1989-S 1 oz Proof Silver American Eagle listed here comes in near-perfect condition. A PR69 coin exhibits full, original mint luster and comes with a maximum of two minor detracting flaws. Examples of acceptable flaws at this grade level include only minuscule contact marks or hairlines that are found outside of the primary focal points of the coin. The DCAM label identifies these specimens as deep-cameo coins. Such a designation points to the contrast between the strong, frosted design and the deeply-mirrored, clear background field. The contrast is so startling that the design almost appears to float above the coin’s surface.

The obverse side of 1989-S Proof Silver Eagles includes the Walking Liberty depiction. Designed in 1916, this image shows Liberty’s full figure in left-profile relief as she strides toward the sun on the horizon. As she reaches out with her right hand, she carries branches of oak and laurel in her left hand.

On the reverse of the 1989-S 1 oz Proof Silver American Eagle is an image of the heraldic eagle. Designed by John Mercanti, this modern version of the national emblem includes some unique design element, such as the triangular formation of the 13 stars representing the original colonies and the banner in the bird’s beak.

If you have questions, Silver.com is happy to help. Please call us on the phone at 888-989-7223, chat with us live online, or simply send us an email with your inquiries.