No image offers a better representation of the United States and the American people than the bald eagle. The Founding Fathers selected the bald eagle as the nation’s official emblem in 1792 because of the bird’s majesty, power, and longevity. Today, the bald eagle is commemorated on numerous coin series and federal agency logos. These 1990 1 oz Silver American Eagle coins are available in uncirculated condition.

Silver was to be taken from the Defense National Stockpile and minted by the US Mint for sale as commemorative coins. The program was so popular that Congress granted an extension in 2002, and authorized the Treasury Department to purchase additional silver on the open market once silver from the Defense National Stockpile was depleted. This 1990 1 oz Silver American Eagle, and all others, is made only with silver mined in the United States.

Adolph A. Weinman’s image of a walking Lady Liberty is used on the Silver American Eagle. Featured on the obverse side of the 1990 1 oz Silver American Eagle, Lady Liberty can be seen walking toward the setting sun with her right hand outstretched. The word “LIBERTY” is engraved above her head, while the year of minting and the phrase “In God We Trust” is minted below.

On the reverse side of the coin, John Mercanti’s image of a heraldic eagle is included. Mercanti was the US Mint’s chief engraver and designed an image that depicted a bald eagle behind a heraldic shield. The eagle clutches arrows in one talon and an olive branch in the other. Above its head are 13 stars for the 13 original American colonies. Engravings include “United States of America,” the face value, weight, purity, and metal content of the coin.

The United States Mint was founded in 1792 by the US Congress when it passed the Coinage Act of 1792. Today, the mint operates four mint facilities and five additional branch locations. The 1990 1 oz. Silver American Eagle coins, and all others in the series, are produced at three locations: the San Francisco Mint, Philadelphia Mint, and the West Point Mint.

As is the case with all purchases at Silver.com, orders of Silver American Eagle coins are shipped discreetly and are fully insured while in transit on their way to you. If you come across any questions about the 1990 Silver Eagle or our other products please feel free to call us toll free at 888-989-7223. 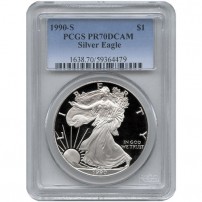