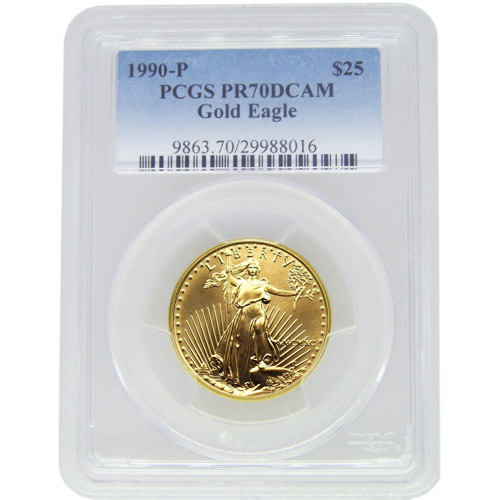 The Gold American Eagle coin program from the United States Mint is one of the most diverse it offers on an annual basis. While its silver counterpart is available in just one weight, the Gold Eagle is available in not just four weights, but three different versions, as well. The proof coin for collectors is among the most visually inspiring in the world. Right now, the 1990-P ½ oz Proof Gold American Eagle is available on Silver.com in pristine condition.

The United States Congress authorized production of an official gold bullion coin for the nation with passage of the Gold Bullion Coin Act of 1986. The program originally consisted of just a bullion coin and a proof version, targeting investors and collectors of gold products.

In 1986, the program debuted with a bullion version of the coin available in 1 oz, ½ oz, ¼ oz, and 1/10 oz weights. The proof version only included a 1 oz coin that year. In 1987, the ½ oz coin was added to the proof lineup, while the ¼ oz and 1/10 oz coins were introduced in 1988. All fractional-weight proof coins were originally struck in Philadelphia, rather than West Point like the 1 oz. proof coin.

On the obverse side of the Gold American Eagle, Augustus Saint-Gaudens’ depiction of Lady Liberty was chosen to represent American power and majesty. Saint-Gaudens was hand-picked by President Theodore Roosevelt in 1905 to redesign American gold coinage, and his Lady Liberty image is considered the finest to ever feature on an American coin.

The reverse was designed by Miley Busiek. A famed sculptor and artist with many public works projects under her belt, Busiek’s design of a family of bald eagles is featured only on the Gold American Eagle coin.

Each coin in this listing has a perfect PR70 proof grade. This means the coin has its full, original luster and no flaws. The deep-cameo designation is for proof coins with a frosted design set overlaying a deeply-mirrored background.

Please contact Silver.com with questions at 888-989-7223, chat with us online, or send us an email. If you are looking for similar coins, check out our selection of Gold Coins.