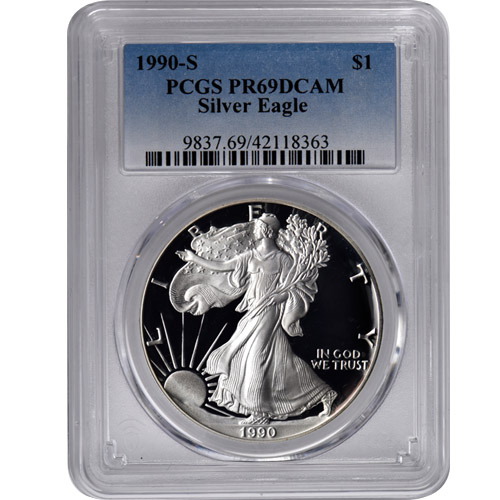 The Proof Silver American Eagles issued in the early years of production saw drastic swings in demand. From the high of 1986 to the quick low reached in 1988, the Proof Silver Eagle ebbed and flowed with the demand for silver and the interest of collectors. The 1990 release marked the last mintage of over 600,000 coins until the early 2000s. Now, 1990-S 1 oz Proof Silver American Eagles are available to you for purchase online at Silver.com in near-perfect condition.

1986 marked the debut of the Silver American Eagle Series with 1 oz silver coins in the BU and Proof collections. The Proof Series set a record in 1986 of 1.446 million coins sold, and that record still stands as of 2021. The closest another coin has come was the 2006 date mark that represented the 20th anniversary of the series.

The obverse of 1990-S 1 oz Proof Silver Eagles features the left-profile effigy of Walking Liberty. Created by Adolph A. Weinman in 1916, this design is widely believed to have been inspired by a French coin design of the era known as the Sower. On the reverse of the 1990-S Proof Silver American Eagle is the heraldic eagle of the United States. This design was modernized in 1986 specifically for this series.

These 1990-S 1 oz Proof Silver American Eagles are available to you for purchase online in near-perfect condition. Coins with a PR69 grade showcase full, original mint luster with no more than two minor flaws. These detractions must be located outside the primary focal point and may not exceed the level of minuscule hairlines or contact marks. The DCAM label indicates the coins have strong, frosted designs and deeply-mirrored, clear fields.