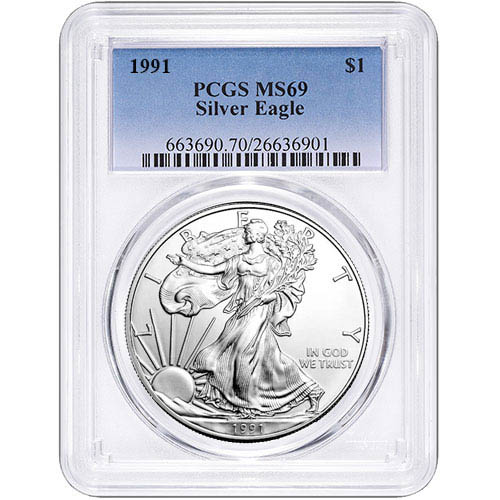 The 1991 Silver American Eagle Coin release was significant in its overall mintage figure. The 1991 release had the highest mintage figure since the 1987 coin and would represent the highest figure seen in the decade stretching from 1988 to 1998. Today, 1991 1 oz Silver American Eagle Coins are available to you online at Silver.com in near-perfect condition.

All 1991 1 oz Silver American Eagle Coins in this listing have Mint State 69 certifications. Known as near-perfect specimens, these coins have full, original mint luster with no more than two minor detracting flaws. Acceptable flaws at this grade level include only minuscule contact marks or hairlines.

On the obverse of 1991 Silver American Eagle coins is the image of Walking Liberty. Adolph A. Weinman created this image in 1916 for use on the nation’s half-dollar circulating coin. It depicts Liberty in left-profile relief as she walks toward the sun on the horizon. She is cloaked in the American flag and carries the oak and laurel branches in her left hand.

The reverse side of 1991 Silver Eagles includes the heraldic eagle of the United States. The symbol was originally created in 1794 by Robert Scot for the first coins ever issued by the United States Mint. This particular design on the Silver Eagles comes from John Mercanti and offers a modern twist on the classic seal.

Demand for silver, in general, was low for most of the 1990s. Beginning in 1988, the price of silver started moving downward on average. The average price of silver per ounce in 1991 was just $4.05 per ounce, more than $.50 lower on average than a year earlier. At one point, silver traded as low as $3.61 per ounce.