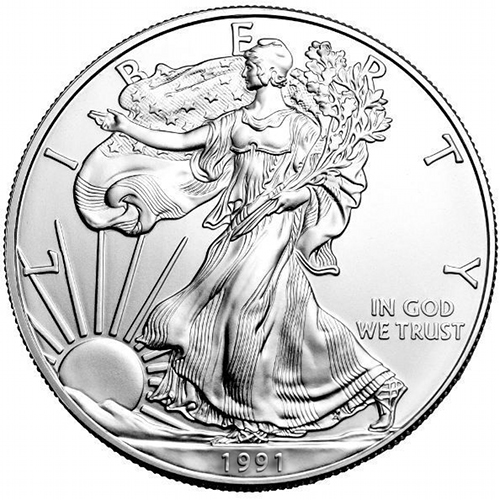 The Statue of Liberty has stood on the East Coast of the United States for over 100 years. Her towering grace and welcoming beauty have been the first thing seen by millions of immigrants as they arrived on America’s shores, seeking a better life and freedom from oppression. Today, Lady Liberty’s image graces numerous commemorative coins, including the 1991 1 oz Silver American Eagle. Like all of the other coins in this series, the 1991 Silver American Eagle holds a $1 face value and contains 1 troy ounce of 99.9% pure silver.

With the federal budget imbalanced and the deficit climbing, the administration of President Ronald Reagan sought to balance the books by selling off some of America’s silver stores. Subsequent legislation paved the way for silver to be removed from the Defense National Stockpile, and used in the minting of a silver bullion coin that could be sold to help raise money for the government.

The first Silver American Eagles were minted at the San Francisco Mint on October 29, 1986. Subsequent sets of this particular coin have been minted in San Francisco, as well as at the Philadelphia Mint and West Point Mint.

Lady Liberty is featured in the “Walking Liberty” image on these coins, moving toward the setting sun in the western sky. Over her head is the word “Liberty,” and at her feet is the phrase “In God We Trust.” The bald eagle holds the heraldic shield of the United States of America, with an olive branch in its right talon and arrows in its left talon. Above its head are 13 stars representing the 13 original colonies.

The San Francisco, Philadelphia, and West Point Mints are all part of the US Mint system. The US Mint is responsible for producing circulation currency, as well as proof and bullion coins for commemorative collections. There were 7,702,991 coins produced in 1991. These 1991 1 oz Silver American Eagle coins are available today in uncirculated condition.