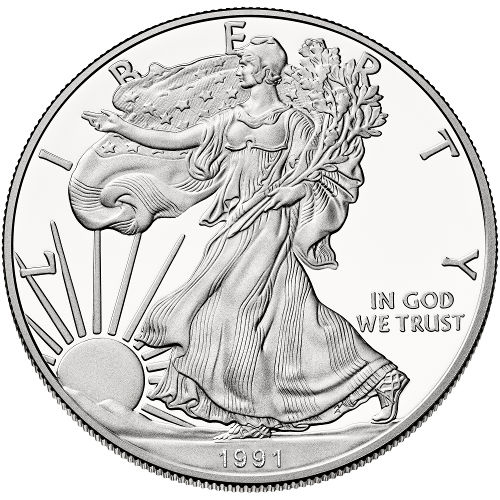 By 1991, the Silver American Eagle coin program had finally reached the levels of its introductory year in terms of mintage, but did so in interesting fashion. The 1991 coin was released at a time of pending economic boom in the US, but there were still global concerns rattling investors. Today, the 1991-S Proof Silver American Eagle coin is available for purchase on Silver.com.

The proof Silver American Eagle had a total mintage of 695,000 coins in 1990, but dropped sharply in 1991 to a level of 511,925 coins. This was due in large part to the massive increase in demand for the coin’s bullion version.

On the obverse of all Silver American Eagle coins is the image of Walking Liberty. This full-length figure of Liberty, designed in 1916 by Adolph A. Weinman, features Liberty wearing the American flag around her shoulders and walking toward the setting sun as a symbol of the nation’s drive to discover a brighter tomorrow.

Please direct any questions to Silver.com at 888-989-7223. You can also chat with us live online or email us your questions.