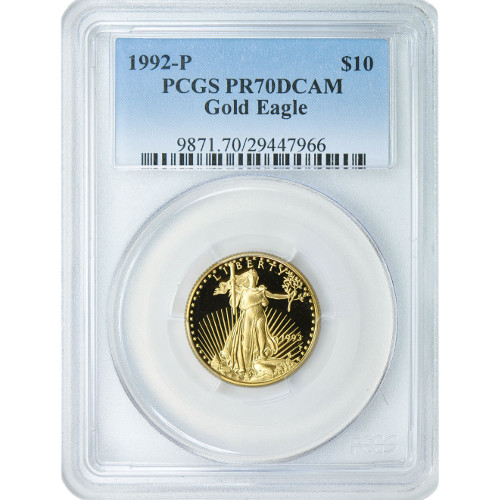 America’s golden age of minting is believed to have stretched across the final two decades of the 19th century and the first two decades of the 20th century. The design on the obverse side of the Gold American Eagle comes from this golden age, as Augustus Saint-Gaudens’ Lady Liberty appears on the coin. If you want to own this inspirational design, you can purchase a 1992-P 1/4 oz Gold American Eagle coins from Silver.com with a PR70 grade from the Professional Coin Grading Service.

Gold American Eagle coins were first struck in 1986, the same year that the United States Mint introduced the Silver American Eagle. While both are the official bullion coins of the United States, there is a big difference between the two. Not only is the design on both sides different between gold and silver, the gold coin is struck in four denominations compared to one for the silver coin.

These 1992-P 1/4 oz Gold American Eagle Coins carry a PR70 grade from the PCGS. Coins with this grade are considered perfectly struck proof coins. The deep cameo, or DCAM, designation is reserved for coins with deeply mirrored, clear background fields and an overlaid design that is strong and frosted. The “P” mint mark signifies these coins were struck at the Philadelphia Mint.

On the reverse side of the coin is the image that gives the Gold American Eagle its name. Miley Busiek was tasked with creating a design specifically for the gold bullion coin program. The result was a family of nesting eagle, with a male eagle returning to the female and hatchlings in the nest. The obverse of the 1992-P ¼ oz. Gold American Eagle bears Saint-Gaudens’ depiction of Lady Liberty. In the image, Lady Liberty is visible walking forward with a torch in her right hand and an olive branch in her left.

The United States Mint first struck the Gold American Eagle coin in 1986 following passage of the Gold Bullion Coin Act in 1985. Established in 1792, the US Mint is one of the oldest in the Western Hemisphere.

If you have questions about this 1992-P 1/4 oz Gold American Eagle PCGS PR70 DCAM or the online purchasing process, Silver.com associates are waiting to address your concerns. Associates are available toll-free at 888-989-7223, online using our live web chat, or via email.