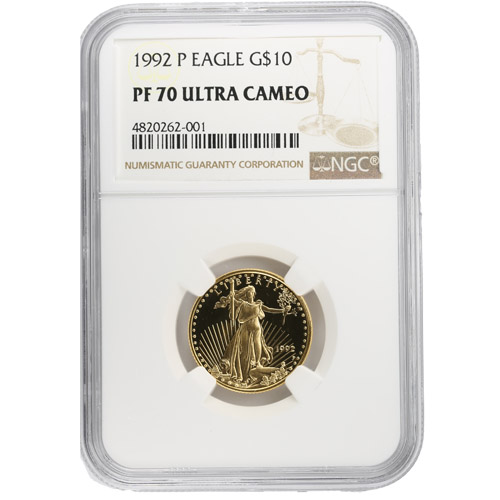 The two most popular weights in the Proof Gold American Eagle collection are the 1/10 oz and 1/4 oz coins. While the 1/10 oz has a long history of garnering the most interest, the 1/4 oz attracts a great deal of attention from collectors with each annual release as well. The 1992 1/4 oz Proof Gold American Eagle Coin is currently available to you for purchase online at Silver.com in perfect condition.

Proof Gold American Eagle coins consist of four options for gold collectors, just like the bullion version of the coin. Early buyers of the Proof Gold Eagle would have found only the 1 oz coin available in 1986 though. The fractional weights were introduced over a two-year period, with the 1/2 oz coin arriving in 1987 and the two smaller weights arriving in 1988.

These 1992 1/4 oz Proof Gold American Eagle coins are among the last which were struck at the Philadelphia Mint bearing a “P” mint mark. The fractional weights were struck in Philadelphia from 1987 until 1993. The 1992 Proof Gold Eagles represent the first year in which any Gold American Eagle coin had a date mark with Arabic numerals. From 1986 to 1991, the coins had Roman numerals for date marks.

On the obverse of these 1992 1/4 oz Proof Gold American Eagle Coins, you’ll find the image of Lady Liberty. This was a new vision for Liberty when it debuted in 1907, offering a departure from previous Greek and Roman designs inspired by the Goddess of Liberty. Augustus Saint-Gaudens envisioned a bold and powerful Liberty as the guiding force for the nation as it emerged on the global stage.

We encourage Silver.com customers to call us with questions about gold. You can reach us at 888-989-7223, chat with us live online, or email us directly.