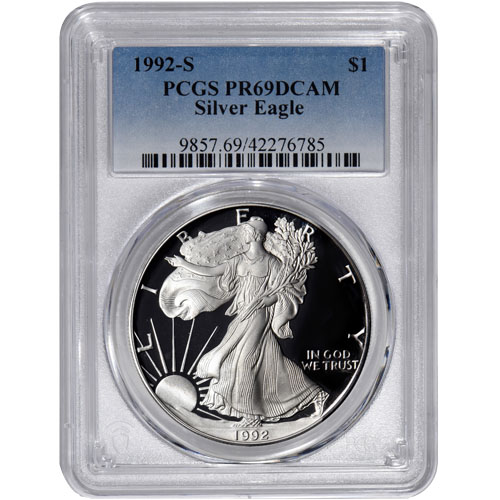 The collectible version of the Silver American Eagle, the Proof Silver Eagle has impressive mintage figures for a collector series, but is dwarfed by the demand for the Brilliant Uncirculated coins in the collection. The 1992 release of the coins marked the first time in the history of the series that mintage had slipped below 500,000 in a single year. Today, near-perfect 1992-S 1 oz Proof Silver American Eagles are available to you at Silver.com.

When the 1992 Proof Silver Eagle was released, it marked the first time in the history of the series that mintage had fallen below 500,000 coins. The drop from 1991 was just over 13,000 coins, but was significantly down from 1990 by a figure of nearly 200,000 coins. Mintages began to fall in 1991 and would continue dropping through 1994. The 1992 release was also significant in that it was the last time the regular Proof Silver Eagle was struck at the San Francisco Mint. Production moved to the Philadelphia Mint in 1993.

All of these 1992-S 1 oz Proof Silver American Eagles are available in near-perfect condition. The PCGS issues a PR69 grade to coins that have full, original mint luster with a maximum of two minor detracting flaws. Examples of flaws that are acceptable at this grade include only minuscule contact marks or hairlines that must be located outside of the primary focal points of the coin. A DCAM specimen is one that comes with strong, frosted design elements overlaying deeply-mirrored, clear fields.

On the obverse of 1992-S Proof Silver Eagles is an effigy of Liberty known as Walking Liberty. Designed by Adolph A. Weinman, the image shows Liberty in left-profile relief walking toward the sun on the horizon as it crests a mountain.

Please contact Silver.com if you have any questions. Our team can help you on the phone at 888-989-7223, online through our live chat, and using our email address.