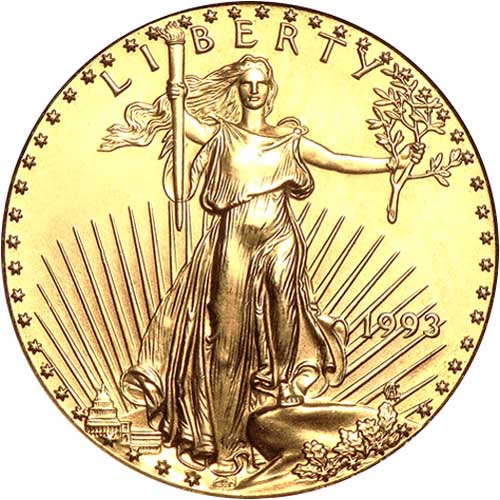 All 1993 1 oz Gold American Eagle Coins in this listing are in BU condition. Coins in BU condition exhibit no signs of wear and tear, though you may notice a range of minor flaws that include breaks in the luster, spotted surfaces, and contact marks from the coining process.

For the first time in the history of the Gold Eagle coin program, the US Mint saw back-to-back years of increasing demand for the coins. The Gold Eagle’s 1 oz weight jumped impressively from 275,000 coins in 1992 to 480,192 coins in 1993. Across the board, all four weights of the bullion coin increased in 1993.

On the obverse of the 1993 1 oz Gold American Eagle coin you’ll find the image of Liberty that has gone down in American history as the most popular design ever to feature on American currency. Augustus Saint-Gaudens created this image in 1907 for use on the $20 Gold Double Eagle coin, and featured Liberty in a flowing robe with flowing hair as she walks forward from the nation’s capital leading the country into the future.

The reverse of the Gold American Eagle coin includes the design of a bald eagle family. A male eagle is depicted flying overhead with an olive branch in its talons while a female guards the nest and its young hatchlings inside.

Gold prices in 1993 were all over the board. The price of gold spent January, February, and most of March around $330 per ounce, and then went on a five-month surge that saw prices spike above $400 per ounce. However, gold would decline back to levels around $350 and finish the year at $391.75.

If you have any questions about these gold coins, please don’t hesitate to ask. Silver.com customer service is available to you on the phone at 888-989-7223, online using our live web chat feature, and via our email address.