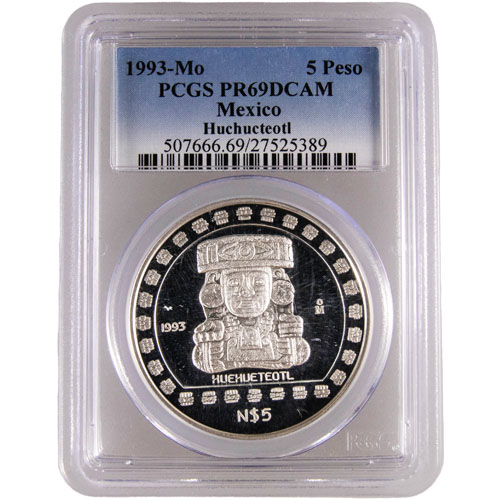 Round out your collection of Aztec god coins or add an interesting conversation piece to your display case. Mexico’s proof and BU coins include a number of interesting designs depicting elements of Aztec mythology, including this 1993 Proof 1 oz Silver Mexican Huehueteotl 5 Peso Coin.

We know you’ll want to protect this coin, which is why we ship it in a plastic slab. You can display or store the coin in the slab if desired to maintain the PR69 near-perfect condition as graded by the PCGS. The coin’s deep cameo design along with the excellent condition makes it a lovely collector’s item.

The Mexican national coat of arms appears on the obverse of the coin. The coat of arms is made up of a Mexican eagle (or golden eagle) perched on a prickly pear cactus. The eagle is eating a rattlesnake, which is a nod to an Aztec legend that says the people would know where to place their city once they saw a snake being eaten by an eagle.

An Aztec-style statue of the god Huehueteotl is shown on the reverse of the coin. Huehueteotl is the Aztec god of fire, and legends say he was the creator of all life. He is one of a pantheon of gods in Aztec mythology. On both sides of the coin, a D-shaped border surrounds the main image.

The design of this coin was originally created for a series in 1992 that includes three designs featuring Aztec gods. The 1992 coins were issued in 100 peso denominations. However, the Mexican government issued new denominations starting in 1993. In 1993, the coin was reissued with only one change: instead of a denomination of 100 pesos, it was 5 new pesos.

With only 800 coins minted, this item is hard to find. Contact us at 1-888-989-7223 if you need have any questions about gold for sale. You can also reach our representatives via the website chat button or by sending us an email.