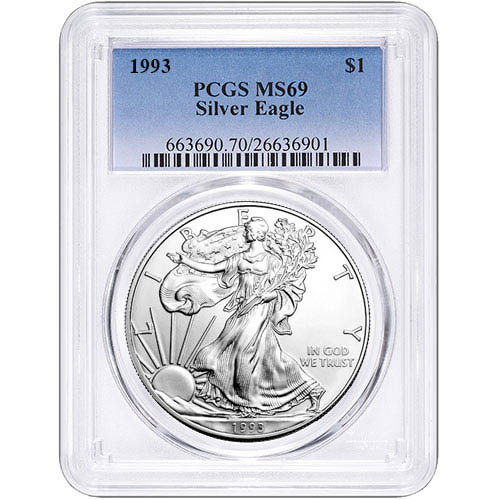 The Silver American Eagle experienced a brief increase in demand during 1993, powered in part by rising silver prices and a short-term increase in the demand for silver. The 1993 coin had the third-highest mintage figure during the 1990s behind the 1991 release and 1999 coin. Right now, 1993 1 oz Silver American Eagle Coins are available to purchase online at Silver.com in near-perfect condition.

Each 1993 1 oz Silver American Eagle Coin available to those buying silver in this listing comes with a Mint State 69 certification. Coins in this condition exhibit full, original mint luster and present with no more than two minor detracting flaws. The coins feature flaws that include only minuscule contact marks or hairlines.

The 1993 Silver Eagle had a final mintage of 6,763,762 coins. The next five years would see significantly lower mintage figures, and the 1993 issue represented a healthy growth in demand from the prior year with 1.2 million more coins struck and sold. Much of this change in demand was a result of the first increase in the average price of silver since the mid-1980s.

Throughout 1993, silver traded in the mid to upper $4 range. Although it finished with an annual average of $4.31 per ounce that was much higher than the previous two years in which silver traded an average under $4 per ounce.

On the obverse of Silver American Eagle 1 oz coins is the image of Walking Liberty. This iconic design captures Liberty’s appearance as she walks toward the sun on the horizon wearing the American flag over her shoulders and carrying oak and laurel branches in her left hand. Weinman created this design in 1916.

The reverse of 1993 1 oz Silver American Eagles features the heraldic eagle of the United States. The image was modernized in 1986 for the Silver Eagle release by US Mint designer John Mercanti.

If you have any questions about these coins, please call Silver.com. Our customer service team is available at 888-989-7223, or you can reach out to us online through our live chat and email address features.