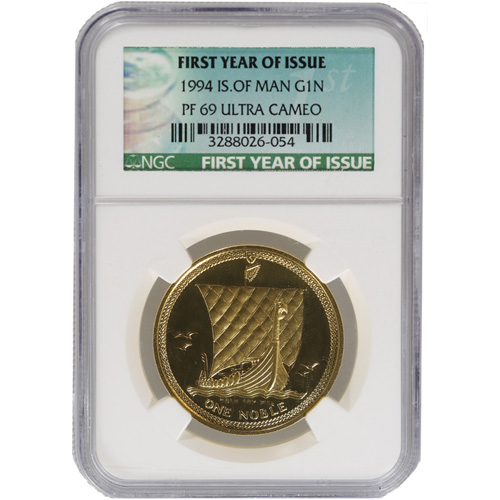 The first release of Isle of Man Noble bullion coins from the Pobjoy Mint came in 1983 with a platinum series. The very first issue of this design concept in a gold bullion series came in 1994. This date was specifically chosen as it marked the 650th anniversary of the first Noble coins ever issued in the British Isles. Now, near-perfect 1994 1 oz Gold Isle of Man Nobles are available to you for purchase online at Silver.com.

In 1344, during the reign of King Edward III, the Kingdom of England introduced a gold coin known as the English Noble. The coins featured an effigy of the reigning monarch on one side with a sailing vessel on the other. At this point in history, the Isle of Man, situated between Ireland, Scotland, and England in the Irish Sea, had already established a steady parliament that was in place for nearly 400 years.

Though the Isle of Man is now a British Crown Dependency, the island has a long history of Viking habitation and control. Its joint past connected to both Viking and British history is reflected in the design of the Gold Isle of Man Nobles. The coins borrow the concept of the English Noble, adding a twist that reflects the rich Viking history of the small island.

Queen Elizabeth II features on the obverse of 1994 1 oz Gold Isle of Man Nobles. This is the right-profile portrait as designed by Raphael Maklouf in 1985 for the Royal Mint of England. It is widely considered one of the most regal portraits of the Queen and comes with a depiction of the George IV State Diadem Crown on her head.

A Viking longship is shown on the reverse side of 1994 Gold Isle of Man Nobles. The English Nobles of the 14th century often featured a ship, sometimes with and sometimes without the monarch, on the reverse of the coins. In a nod to the Viking history of the Isle of Man, these Gold Nobles showcase the Viking longships that allowed the Norse culture to spread across the North Sea as Vikings raided the British Isles and northern Europe.

These 1994 1 oz Gold Isle of Man Nobles are offered in near-perfect condition. Coins in PF69 condition showcase full, original mint luster with a maximum of two minor flaws. Examples of acceptable flaws include only minuscule contact marks and hairlines, with all flaws found outside of the primary fields. The included UCAM designation indicates a proof coin with strong, frosted designs and deeply-mirrored fields.

Silver.com customer service can answer your questions about gold for sale at 888-989-7223. We are also available online through our live chat and email address features.