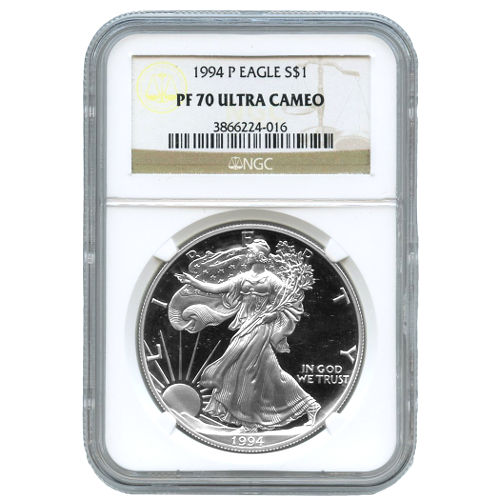 Each coin in this product listing earned a perfect PF70 grade from the NGC. Coins in this condition exhibit full, original mint luster and no detracting flaws. UCAM is a term that identifies a proof coin with a strong, frosted finish on the design set and a deeply-mirrored, clear background field.

On the obverse face of all Silver American Eagle coins is the image of Walking Liberty. Created in 1916 by Adolph A. Weinman, it originally appeared on the Walking Liberty Half Dollar through 1947. The reverse features a unique modernization of the heraldic eagle of the United States. Refined in 1986 specifically for the Silver Eagle, the work was done by then-Chief Engraver of the United States Mint, John Mercanti.

Please direct your questions to a Silver.com associate at 888-989-7223. You can also connect with us online using our live web chat and email service.