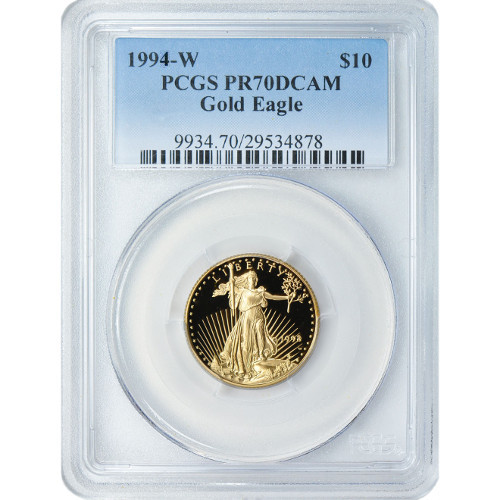 From this point forward, all Proof American Gold Eagle coins would be produced by the West Point Mint, as well as all bullion coins in the program. Mintage in 1994 was up just slightly from 1993, rising less than 2,000 in total. This is largely attributed to the approach of the US Mint’s 10th anniversary celebration the following year in 1995.

On the obverse of all coins is the image of Lady Liberty from Augustus Saint-Gaudens. Created in 1907, it originally appeared on the $20 Gold Double Eagle coin from 1907 to 1933. The reverse features the family of nesting bald eagles created in 1986 by Miley Busiek, and is an exclusive design of the American Gold Eagle coin series.

Each of these coins is a perfect specimen according to the PCGS. Coins with a PR70 grade have full, original mint luster and feature no detracting flaws of any kind. Additionally, these coins have a DCAM finish that includes strong, frosted designs and a deeply-mirrored, clear background field.

If you have any questions about Proof American Gold Eagle coins, we encourage you to reach out to Silver.com. Our associates are available on the phone at 800-276-6508. We’re also available online using our live chat and email features.