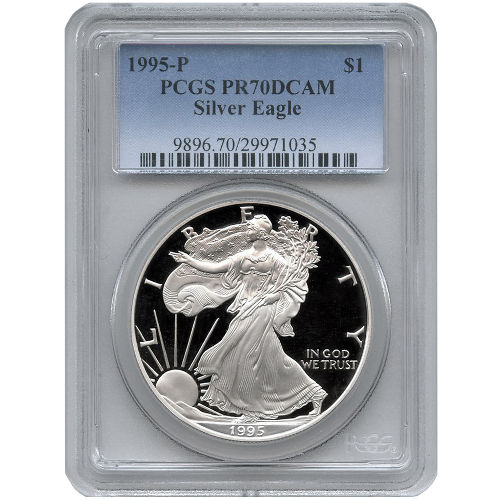 The Silver American Eagle program from the United States Mint celebrated its 10th anniversary in 1995, and the series featured the first-ever release of two different proof coins in the same year. Right now, the 1995-P Proof Silver American Eagle coin is available in perfect condition on Silver.com.

For 1995, the United States Mint celebrated the 10th anniversary of the coin with the production of two proof coins. The standard 1995-P proof coin was produced at levels significantly higher than the year before.

On the obverse face of the coin is the Walking Liberty design from Adolph A. Weinman, which first appeared on the Walking Liberty Half Dollar from 1916 to 1947. The reverse bears the modern heraldic eagle of the United States, which was refined for use on these coins by former-Chief Engraver of the US Mint, John Mercanti, in 1986.

Each coin in this listing has a perfect PR70 grade from the PCGS and a DCAM designation. PR70 coins have their full, original mint luster and no detracting flaws. The deep-cameo finish is reserved for coins with a strong, frosted finish on the design and a deeply-mirrored, clear background field.