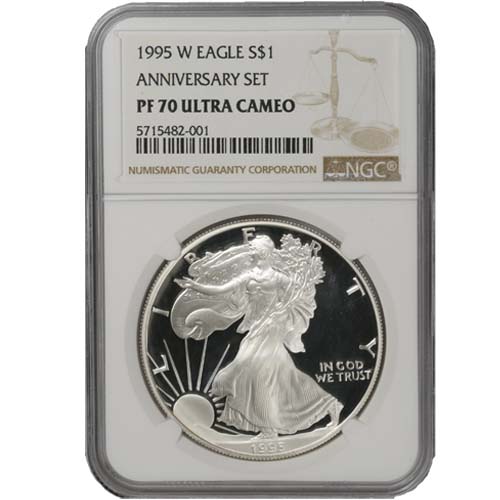 The single most-coveted release of the Proof Silver American Eagle is the 1995 version of the coin struck at the West Point Mint. This coin was issued as a special release to mark the 10th anniversary of the coin program and holds the record for the lowest mintage of any single coin in the entire history of the collection. Today, 1995-W 1 oz Proof Silver American Eagles are available to you online at Silver.com in perfect condition.

All of the 1995-W 1 oz Proof Silver American Eagles in this product listing come to you with a perfect PF70 certification from the NGC. Coins in this condition have full, original mint luster and there are no detracting flaws of any kind present on the designs or surfaces. The included UCAM label identifies the coins as ultra-cameo specimens with strong, frosted designs overlaying deeply-mirrored, clear background fields.

Walking Liberty is shown on the obverse of the 1995-W 1 oz Proof Silver American Eagle. Adolph A. Weinman created this design in 1916 and submitted it to the US Mint for consideration to replace the designs of the Barber Coinage. It was eventually chosen for the US half dollar and was featured on that coin until 1947.

The heraldic eagle of the United States is the oldest coin design in American history and it has featured on the reverse of 1 oz Proof Silver American Eagles every year since the introduction of the program. Designed by John Mercanti in 1986 for this series, you will find the American bald eagle with the national shield on its chest and a triangular cluster of 13 stars above its head.

Please feel free to contact Silver.com with any questions that you have about these silver coins for sale. You can call us at 888-989-7223, chat with us live online, or simply send us an email with our inquiries.