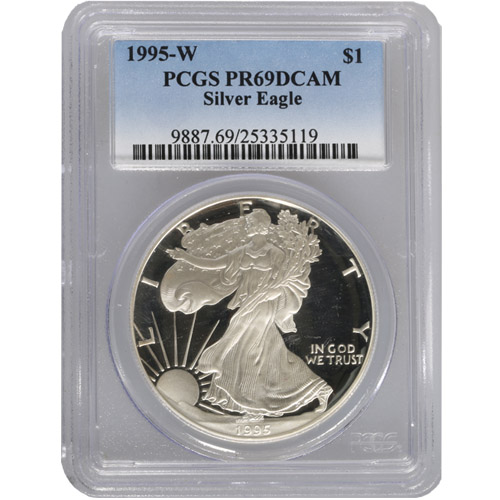 Proof Silver American Eagles have fluctuating mintage figures each year. Some years have much higher demand than others, but no coin has ever seen a mintage as low as the special 1995-W Proof Silver Eagle. Purposely issued in low numbers as part of the 10th-anniversary celebration of the coins, the 1995-W specimen is highly sought-after today by collectors. Now, 1995-W 1 oz Proof Silver American Eagles are available to you for purchase online at Silver.com in near-perfect condition.

In 1995, the United States Mint was producing the regular Proof Silver American Eagles at the Philadelphia Mint. This was standard practice for the collectible version of the coin from 1993 to 2000. Previously, the proof coins had been struck by the San Francisco Mint from 1986 to 1992. The West Point Mint would take over in 2001, with a preview of “W” mint marks available on this limited-issue 1995-W Proof Silver Eagle.

The oldest American coin design still in use today appears on the reverse of 1995-W Proof Silver American Eagles. The heraldic eagle of the United States was first designed in 1792 by Robert Scot, the 1st Chief Engraver of the United States Mint. This version was modified in 1986 for the Silver Eagles by John Mercanti, the man who would go on to serve as the 12th Chief Engraver of the US Mint from 2006-2010.

These 1995-W 1 oz Proof Silver American Eagles are available with PR69 certifications from the PCGS. Coins in this condition showcase full, original mint luster and a maximum of two minor detracting flaws. Examples of acceptable flaws at this level include only minuscule contact marks or hairlines. DCAM coins, each one of these specimens has strong, frosted designs and deeply-mirrored, clear fields.

Silver.com customer service is available to answer your questions at 888-989-7223. You can also chat with us live online or email us directly.