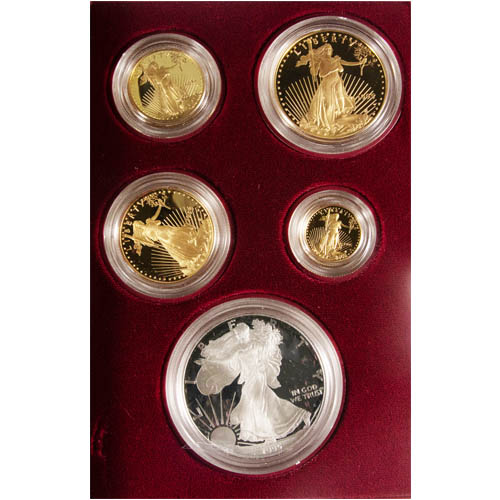 In 1995, the United States Mint marked the 10th anniversary of the American Eagle bullion series with its first-ever five-coin release. This 10th-anniversary set came with five proof coins that included a 1 oz Proof Silver Eagle and all four weights of the Proof Gold Eagle. Today, 1995-W Proof American Eagle 10th-Anniversary Five-Coin Sets are available to you for purchase online.

The release of the 1995-W Proof American Eagle 10th-Anniversary Five-Coin Set came with some very unique issues. For example, the Proof Gold Eagles in this set were only available for the second time with the “W” mint mark on the fractional-ounce coins as those three weights were issued at the Philadelphia Mint from 1987-1993. The Proof Silver Eagle in this set was the first ever issued by the US Mint at the West Point Mint with a “W” mint mark.

All of these 1995-W Proof American Eagle 10th-Anniversary Five-Coin Sets are available to you with the original packaging from the United States Mint. The coins are housed together inside of a five-coin presentation box from the US Mint and come with a Certificate of Authenticity. Proof coins have frosted design elements overlaying mirrored fields.

For the obverse side of the 1995-W Proof American Eagles in this coin set, the US Mint features two of the most iconic images of Liberty ever featured on American coins. The silver coin has Walking Liberty as designed in 1916 by Adolph A. Weinman. Liberty is featured with the American flag draped around her figure as she walks toward the sun on the horizon. The obverse of the gold coin depicts Lady Liberty as designed in 1907 by Augustus Saint-Gaudens. In this design, Liberty walks toward the viewer with a torch in her right hand and an olive branch in her left as she walks away from Washington D.C.

In the reverse design of 1995-W Proof American Eagles in the 10th-Anniversary Five-Coin Set, you will find two depictions of the American bald eagle. The silver coins have the heraldic eagle design with a bald eagle supporting the national shield. The gold coins feature a bald eagle family nest with a female and hatchlings inside as a male eagle soars overhead.

Please feel free to reach out to Silver.com with any questions. You can call us on the phone at 888-989-7223, chat with us live online, or simply send us an email.