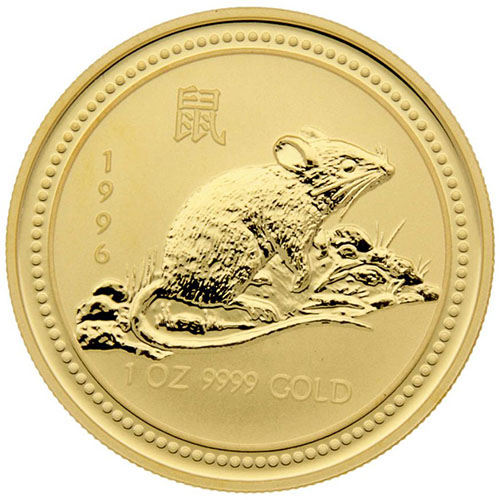 The Lunar Series of gold coins for sale from the Perth Mint were available from 1996 to 2019 over the course of two separate collections. Each series ran the full 12-year cycle of the Chinese Lunar Calendar from the Year of the Rat to the Year of the Pig. The program launched with the 1996 Year of the Rat coin. Right now, those 1996 1 oz Gold Australian Rat Coins are available to purchase online at Silver.com.

Each of the individual 1996 1 oz Gold Australian Rat coins available to you from the Perth Mint comes in Brilliant Uncirculated condition. The coins in this listing come with protective plastic capsules. The Perth Mint increased mintage figures as the Lunar Series I and II coins gained popularity, and as the debut release of the entire program, the 1996 Gold Australian Rat Coin has among the lowest. In fact, it is the second lowest at just 16,593 coins in total.

The Year of the Rat comes first in the lunar calendar. The Chinese Lunar Calendar, or Zodiac, follows a 12-year cycle that is said to have been set by the arrival of each animal at a party called by the Jade Emperor. First in the series is the rat as he arrived first to the party.

On the reverse of 1996 1 oz Gold Australian Rat Coins is the image of a rat climbing along rocks. Engravings include the Chinese character for rat, the year of issue “1996,” and the markings “1 oz 9999 Gold.” Tony Dean created this design for the Perth Mint’s first issue in the Lunar Series I program.

The obverse of 1996 Gold Australian Rat coins includes the right-profile portrait of Queen Elizabeth II. Created in 1984 for the Royal Mint of England by Raphael Maklouf, this design is the third-generation portrait on British and most Commonwealth coins that depicts the Queen with the Royal Diadem crown, earrings, and a necklace. Engravings read “Elizabeth II,” “Australia,” and “100 Dollars.”

If you have any questions, Silver.com customer service will be happy to help answer them. You can call us at 888-989-7223, chat with us live online, or simply email us.