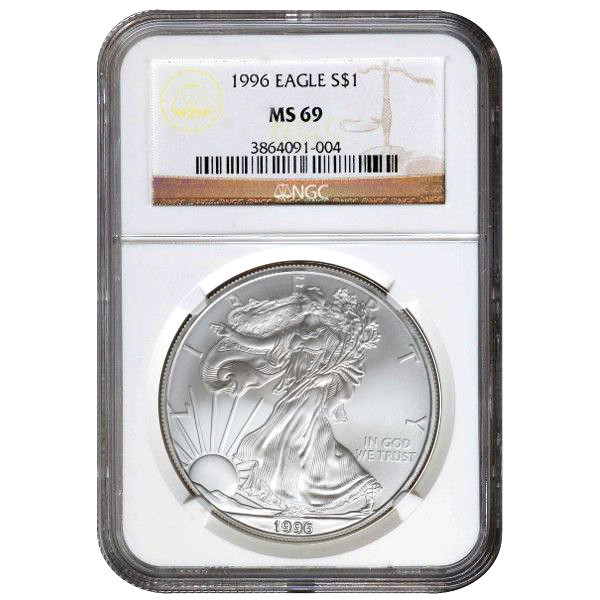 Silver American Eagle coins are produced on an annual basis by the United States Mint. The design used on the obverse and reverse side of the coins do not change from year to year, and have not been changed since the coins were first introduced in 1986. Today, you can purchase this 1996 American Silver Eagle NGC MS69 from Silver.com.

The obverse side of each coin features the Walking Liberty design created by noted artist Adolph A. Weinman in 1916. Originally used on the Walking Liberty Half Dollar, the image features Lady Liberty with one hand outstretched and the American flag draped over her shoulders. Engravings include “Liberty,” “In God We Trust,” and the year of minting.

On the reverse is John Mercanti’s heraldic eagle design. The chief engraver of the US Mint, Mercanti created his image in 1986 for use on the Silver American Eagle coin program. Engravings on this side include “United States of America,” and the coin’s weight, purity, metal content, and face value.

The United States Mint, founded in 1792, is responsible for the production of the federal government’s circulation and commemorative coins, as well as official medals. The San Francisco, Philadelphia, and West Point facilities contribute to production each year.

If you have questions about NGC Graded Silver Eagles, a Silver.com associate is waiting to assist you. Our associates are available on the phone at 888-989-7223, online through our live web chat service, and via email.