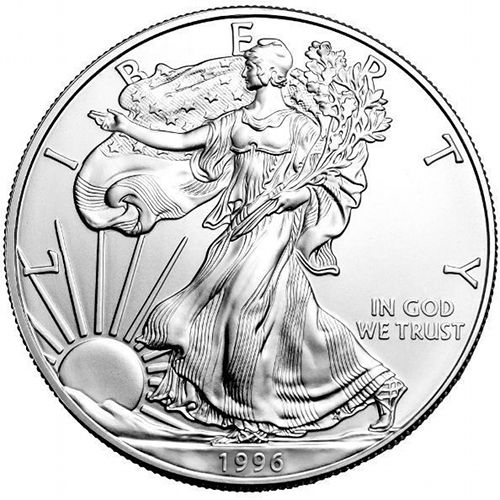 This 1996 1 oz Silver American Eagle is available in uncirculated condition. The Eagle series was first made by the United States Mint in 1986 and since it has become one of the world’s most popular silver coins. Each coin is made with .999 pure silver and weighs a total of 1 troy ounce.

The Founding Fathers saw a lot of similar characteristics between the bald eagle and the spirit of the American people. The bald eagle was revered for its majesty, power, and longevity. These were all traits that the founders of the US believed the American people possessed. It comes as no surprise then that the bald eagle was selected as the official national emblem in 1792. Since that day, the eagle has been featured on various currency series and federal agency logos.

The Silver American Eagle coin program was first authorized by Congress with the passage of the Liberty Coin Act in July 1985. The first coins were produced and sold to the public in 1986. Congress passed the Liberty Coin Act as a means of raising funds for the federal government. Silver was released from the Defense National Stockpile and provided to the US Mint for the production of the Silver American Eagle coins.

The coins were sold to the public in an effort to generate income for the government. Silver American Eagle coins proved so popular with the investors at home and abroad that Congress extended the program in 2002. The 1996 1 oz. Silver American Eagle, and all other coins in the series, is produced using only silver mined inside the United States.

On the obverse side of the 1996 1 oz Silver American Eagle is Adolph A. Weinman’s image of Walking Liberty. In his depiction of Lady Liberty, she can be seen walking toward the setting sun with her right hand outstretched. Her image is surrounded by engravings of “LIBERTY,” the year of minting, and the phrase “In God We Trust.”

The reverse side shows John Mercanti’s heraldic eagle. The chief engraver at the US Mint, Mercanti envisioned a bald eagle behind a heraldic shield, clutching arrows in one talon and an olive branch in the other. There are 13 stars located directly above the eagle’s head which represent the original 13 colonies. Engravings on this side include “United States of America,” the weight, purity, and metal content of the coin, as well as its face value.

We ship all of your orders as quickly as possible and mail them in discreet packaging which is also fully insured. Feel free to ask our customer service team  any questions you might have about our company or products at 1-888-989-7223. They are also available to assist you through email or live chat. 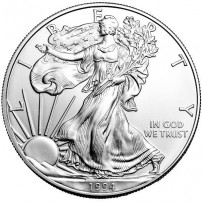