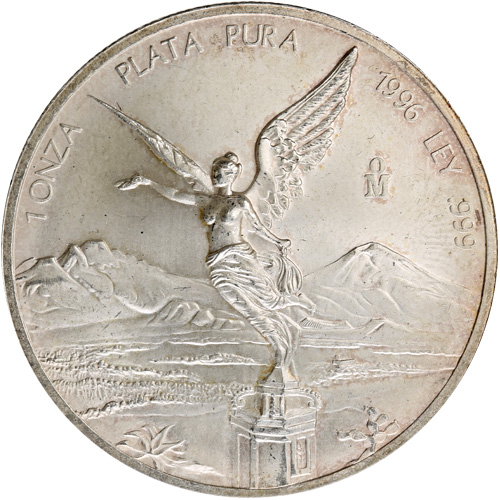 One of the most popular silver bullion products from the North American continent is the Silver Mexican Libertad. Often overshadowed by other coin programs from the Royal Canadian Mint and United States Mint, the Mexican Mint’s flagship series of silver coins has its fair share of admirers around the globe. Right now, the 1996 1 oz Silver Mexican Libertad Coin is available to purchase online at Silver.com.

All 1996 1 oz Silver Mexican Libertad coins in this listing have a BU condition. Coins in this condition have no signs of wear and tear, however you will notice minor flaws ranging from breaks in the luster and spotted surfaces to contact marks as a result of the coining process.

Silver Mexican Libertad coins, and their gold counterpart, have no official face values. The coins are legal tender with the backing of the federal government of Mexico and the Banco de Mexico. If actually used for legal tender transactions, consumers would have to contact Banco de Mexico to learn the current legal tender value of the coins.

The Mexican Mint used some of the nation’s most iconic images in the creation of its Silver Mexican Libertad coins in 1982. The first of these is the image of Winged Victory, also known as the Angle of Independence. Her figure was a reminder of the freedom Mexicans earned through victory in the War of Independence with Spain.

Winged Victory holds the broken chains of bondage in her left hand, as a symbol of the nation’s freedom from Spain. In her right hand, she holds up a wreath crown as a symbol of independent rule.

On the reverse side of the 1996 1 oz Silver Mexican Libertad is a representation of the nation’s coat of arms. In the depiction, a bald eagle is featured locked in battle with a serpent. The eagle’s beak clutches the serpent, while its talon tries to control the body of the snake. Engravings on this side include a wreath under the coat of arms, and the phrase “Estados Unidos Mexicanos” above. Translated into English, the latter phrase reads United Mexican States.

The obverse side of 1996 1 oz Silver Mexican Libertad coins feature Winged Victory, also known as the angel of independence. Engravings include the face value, metal content, purity, and the year of minting.

If you have any questions, please don’t hesitate to ask. Silver.com team members are available to you on the phone at 888-989-7223, online using our live chat, or via our email address.