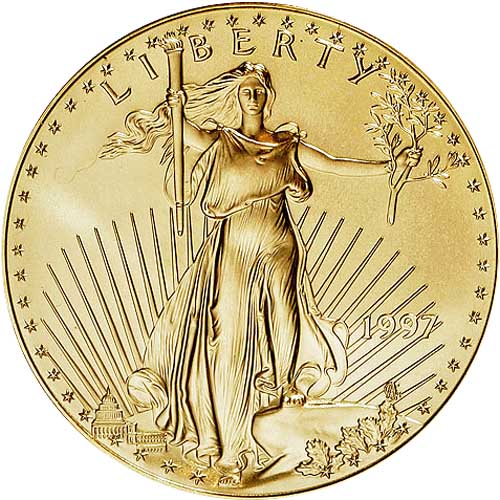 The Gold American Eagle coin is the most diverse offering you’ll find in terms of gold bullion from the United States Mint. These coins are available annually in bullion, proof, and burnished versions, with four weights available in bullion and proof ranging from 1 oz to ½, ¼, and 1/10 oz. The 1997 1 oz Gold American Eagle Coin is available to you online today at Silver.com.

When originally introduced in 1986, the Gold American Eagle was available in bullion with all four weights from 1 oz down to 1/10 oz. The proof coins in the series were only available that first year in 1 oz weights. Over the next two years, the ½ oz coin would be introduced followed by the ¼ and 1/10 oz options.

On the obverse of all 1997 1 oz Gold American Eagle coins you’ll find Augustus Saint-Gaudens’ Liberty design. Introduced in 1907, Saint-Gaudens’ design has been hailed as the greatest coin design in American history and features Liberty holding her torch aloft as a guiding light for the nation.

All 1997 1 oz Gold American Eagle Coins listed here are in BU condition. Coins in BU condition have no signs of wear and tear, though you’re likely to notice minor flaws such as breaks in the luster, spotted surfaces, and contact marks from the process of striking blanks at the mint.

We encourage all Silver.com customers to contact us at 888-989-7223 with questions. You can also reach out to us online using our live chat and email services.