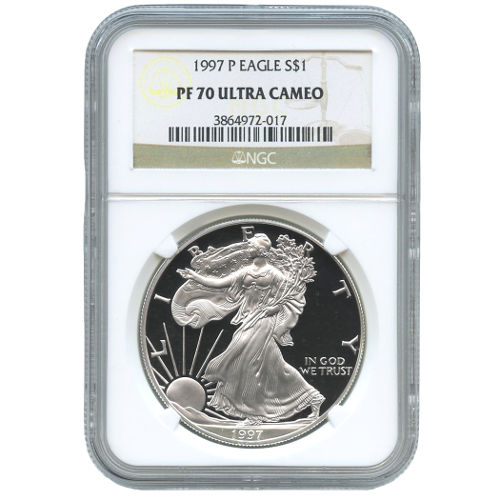 Mintage for the 1997 Silver American Eagle series showed signs of life as the coins shook off rough patches in the mid 1990s, and headed into an era of strong growth. After hitting some of its lowest mintages, the bullion coin rebounded while the 1997 Proof Silver Eagle shrunk modestly. Right now, the 1997-P Proof Silver American Eagle is available as a perfect specimen from Silver.com.

The 1997-P Proof Silver American Eagle coins available to you today are perfect specimens in the eyes of the NGC. Coins with a PF70 grade exhibit full, original luster from the mint and feature no detracting flaws of any kind on the surfaces.

UCAM coins have strong, frosted matte finishes on the design sets and deeply-mirrored, clear background fields. This contrast gives the coin’s design the impression of floating above the surface area of the coin.

The spot silver price per ounce didn’t shift much during 1997, unlike the silver price today. Per-ounce prices averaged $4.91 throughout the year, but did manage to break above $6.00 per ounce in December 1997.

If you have any questions, don’t hesitate to reach out to Silver.com. Our associates are available on the phone at 888-989-7223, online using our live web chat, or via our email address.