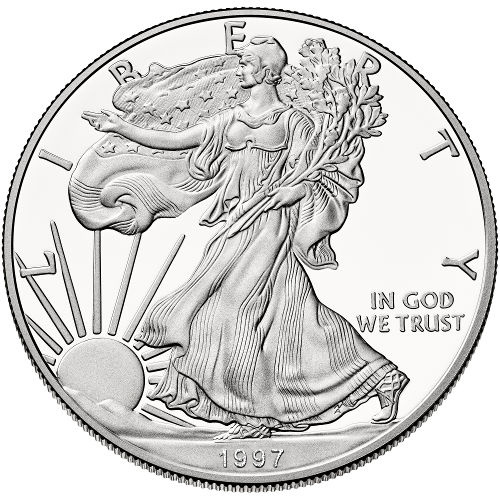 A quiet buzz engulfed the economic climate in the United States in 1997: Y2K. The fear that the nation’s economic, banking, and computing systems would not cope with the transition to 2000 on digital platforms led to a second surge in the popularity of precious metals during the modern era.

The impact of this fear wasn’t immediately felt in 1997, with modest gains in bullion production from 3.6 million coins to 4.29 million and a drop in proof strikings by almost 70,000 coins. However, overall mintage was up from 1996 and would continue on an upward trajectory for the next 5 years in a row.

Adolph A. Weinman’s Walking Liberty design was chosen by the United States Mint in 1986 as the official symbol of the Silver American Eagle coin. Designed in 1916 at the height of America’s Golden Age of coin design, it appeared on the nation’s half-dollar coin from 1916 to 1947.

The reverse face features a design from former-Chief Engraver of the United States Mint, John Mercanti. His design featured the American bald eagle behind the nation’s heraldic shield, clutching arrows in one talon and an olive branch in the other.

If you have questions for a Silver.com associate, please feel free to reach out to us. We’re available on the phone at 888-989-7223, online using our live chat, and via email.