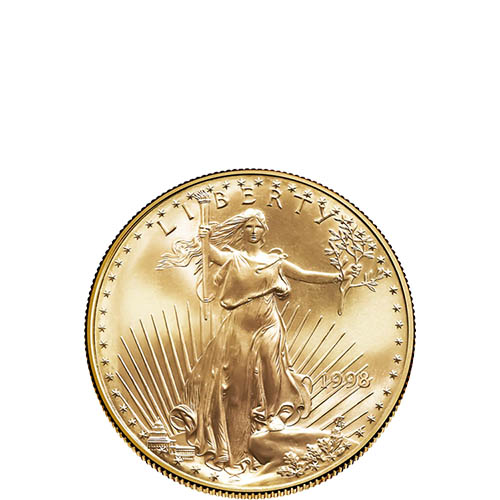 The Gold Eagles from the United States Mint come with three versions each year and four weights available across two of those collections. The best-selling version of the coin is the BU Gold American Eagle. One of the periods of intense demand in the history of the series came in the late 1990s during the Y2K scare. Now, 1998 1/4 oz Gold American Eagles are available to you for purchase online at Silver.com.

The pending Y2K confusion with computer systems and the switch in digits from 1999 to 2000 created a lot of angst in financial markets. The price of gold and silver started to grow in the late 1990s, with demand for both metals growing alongside the cost. The result was a surge in demand for the coins in the Gold American Eagle Series.

The obverse of 1998 Gold American Eagles features a depiction of Lady Liberty from 1907. Created by Augustus Saint-Gaudens for the Gold $20 Double Eagle, the image features Liberty’s full-length figure as she walks toward the viewer with a torch held up in her right hand and an olive branch in her left. The background field features the U.S. Capitol Building in the distance, rays of sun from the horizon, and a ring of 50 stars around the entire element.

On the reverse side of the 1998 1/4 oz Gold Eagle is an image of the American bald eagle. In this design from Miley Busiek, a male eagle is shown flying over the nest as a female eagle guards the hatchlings within the family nest. This design was exclusive to the Gold Eagle Series and has featured on all versions of the coin.