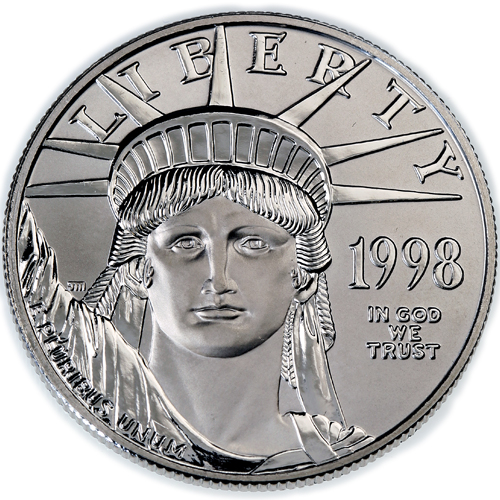 When most investors and collectors think of the American Eagle program from the United States Mint, their minds immediately go to the popular Silver American Eagle and valuable Gold American Eagle. Like other mints around the globe, the US Mint actually produces a platinum version of its popular American Eagle as well. Today, the 1998 1 oz Platinum American Eagle Coin is available from Silver.com in BU condition.

Each 1998 1 oz Platinum American Eagle in this listing has the same obverse and reverse designs as the original bullion coins and those produced since. However, the proof and uncirculated versions of the coin share only the same obverse as the bullion version.

The obverse of the 1998 1 oz Platinum American Eagle features the image of the Statue of Liberty, and is referred to as “Liberty looking to the future” because of its focus on her face and her gaze into the distance. This was designed by former US Mint Chief Engraver John Mercanti in 1997.

On the reverse of each Platinum American Eagle in this listing is the image of a bald eagle as it soars over the sun. US Mint engraver and sculptor Thomas D. Rogers Sr. designed the image of the eagle with its wings outstretched and the rising sun in the lower corner of the design field.

Each of these 1998 1 oz Platinum American Eagle coins has a Brilliant Uncirculated grade. Coins in BU condition exhibit no signs of wear and tear, however you might notice breaks in the luster, spotted surfaces, or contact marks from production.

Please feel free to contact Silver.com with questions at 888-989-7223. You can also reach us on the web using our live chat and email features. Check out our full selection of Platinum Coins.