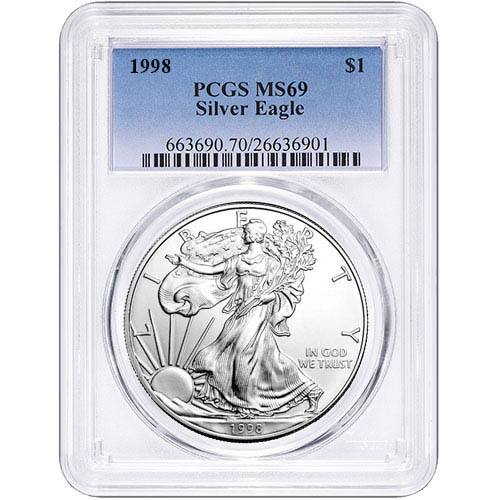 As the late 1990s rolled around, the US economy showed signs of weakness, and the Y2K phenomenon emerged, the demand for silver coins for sale began to rise along with demand for precious metals in general. Along with an increased mintage in 1998, the price of silver rose on average by more than $1. Now, 1998 1 oz Silver American Eagle Coins are available to you online for purchase at Silver.com with a PCGS certification.

Mintage for the 1998 Silver American Eagle coin rose by just over 550,000 coins compared to the year before. The final mintage declared for the year was 4,847,549 coins and it was the highest mintage since 6.7 million coins were issued in 1993. This was, however, the first sign of solid improvement in the series.

In the years to come, Silver Eagle demand would continue to rise as it pushed toward a peak of 10.5 million coins in 2002 before cooling off again for a period of time. As demand for Silver Eagles grew, so too did the price of silver. Although silver finished the year with an average of $5.55 per ounce, it spiked as high as $7.81 per ounce during the year and still marked improvement on prices in 1997.

On the obverse of all Silver American Eagle coins is Adolph A. Weinman’s depiction of Liberty. This design is referred to as Walking Liberty and is believed to be inspired by a French coin design known as “the sower.” This image captures Liberty in left-profile relief as she walks toward the sun on the horizon wearing the American flag over her shoulders.

The reverse side of 1998 1 oz Silver American Eagle Coins includes the heraldic eagle of the United States. This design is a modern version of the historic seal that was created in 1986 by John Mercanti for use on the Silver Eagle coins.

1998 1 oz Silver Eagle coins offered to you here have a PCGS certification. Mint State 69 coins are characterized by the presence of full, original mint luster and a maximum of two minor detracting flaws. Acceptable flaws include only minuscule contact marks and hairlines. The 1998 release of Silver Eagles is memorable because it was the last year the San Francisco Mint handled the coining of Silver Eagles for the US Mint.

We encourage Silver.com customers to call us with questions at 888-989-7223. You can also contact us online through our live chat and email address features.