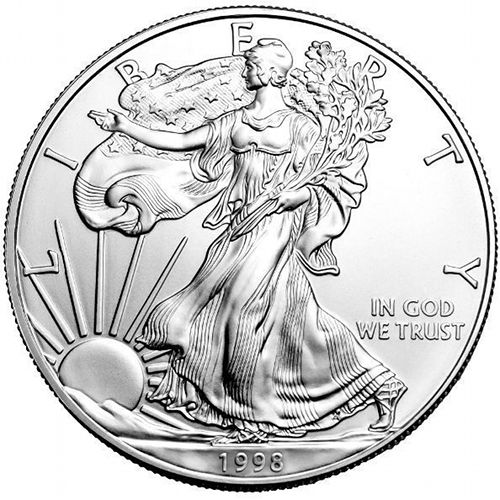 The 1998 1 oz Silver American Eagle coin is now available in uncirculated condition. These coins weigh one troy ounce and are struck in .999 fine silver with a $1 USD face value. With a design that has went unchanged for over 25 years, the Silver American Eagle is one of the most widely recognized bullion coins in the world.

The United States Mint has produced a number of commemorative coins over the decades, but none has ever carried the prestige and respect of the Silver American Eagle coin. The Bald Eagle is synonymous with the United States of America. The majestic bird of prey has been the symbol of the United States for over a century, and its image has graced a number of commemorative coins. Over the course of nearly 30 years of production, the Silver American Eagle has become the most popular bullion coin in the US.

The Silver American Eagle coin was first minted by the US Mint in 1986 and features two images stamped onto its faces. On the one side is the American Eagle symbol that is often associated with branches of the United States government. On the opposite side, the image of Lady Liberty walking with an outstretched hand is featured. John Mercanti is the chief engraver at the US Mint and is responsible for the design of the American Eagle featured on this coin.

The image of Lady Liberty, known as “Walking Liberty,” was first designed by Adolph Weinman in 1916 for use on the US Half Dollar. The American Eagle carries the stamped shield of the Great Seal of the United States. During nearly 30 years of production, the Silver American Eagle coin has become not just the most popular silver coin in the US, but around the world. The 1998 coin series had the fifth-lowest minting among all silver coins from the US Mint.

If you would like to learn more about these 1998 Silver American Eagle Coins, or have any questions feel free to call Silver.com at 1-888-989-7223. As an alternative, feel free to use the live chat feature, send us an email, or fill out the online form located on our contact page to get in touch. 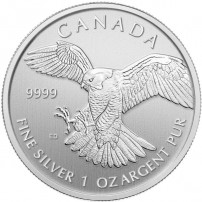