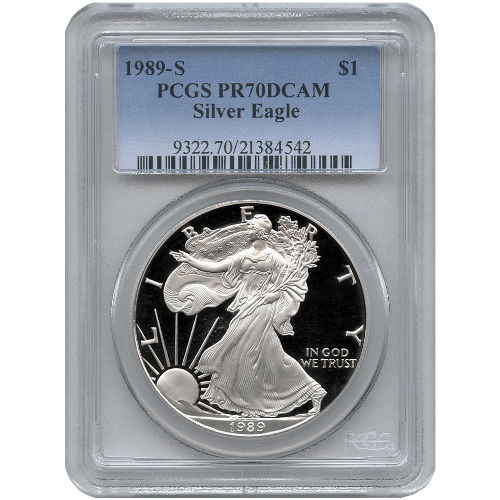 The Silver American Eagle coin program continued to gain momentum in the late-1990s as the global economy showed signs of weakness and skepticism with the approach of Y2K. The unknown impact of the 2000-changeover resulted in an increase in the interest of precious metals. As a result, both the bullion and proof versions of the Silver Eagle rose in 1998. The 1998-P Proof Silver American Eagle is available now from Silver.com with a perfect certification.

For the second year in a row, Silver American Eagle coin production had increased, pushing the program further away from its low points in the mid-1990s. Bullion production was up slightly from 4.29 million in 1997 to 4.84 million in 1998.

The Proof Silver American Eagle also experienced an increase in popularity, with mintage jumping slightly from 435,000 the year before to 450,000 in 1998. The 1998 production year was significant in that it marked the last year in the program’s history that the proof and bullion coins would be struck at separate mints.

Silver price per oz throughout 1998 was extremely volatile. The price of an ounce of silver started the year near $5.80, shot up as high as $7.81 early on in February, and fell down to the $5.00 range by midyear. The average throughout the year, spikes and drops included, was about $5.55 per ounce.

These 1998-P Proof Silver American Eagle coins are all perfect proofs with PR70 grades from the PCGS. Each has its full, original mint luster and no detracting flaws. As DCAM coins, these proofs have strong, frosted design sets and deeply-mirrored, clear background fields.

Please contact Silver.com with any questions you might have about these coins. Our associates are available at 888-989-7223, online using our live web chat, and via our email address.