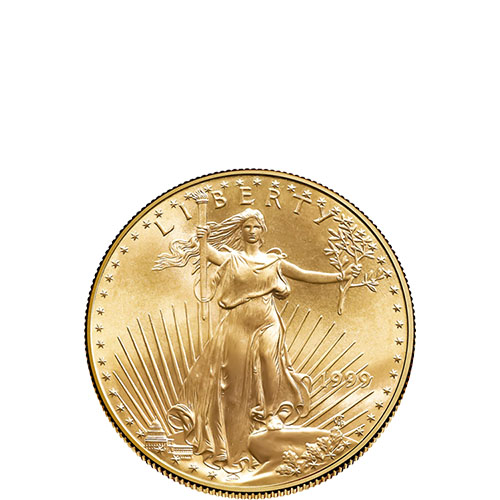 With a growing demand for gold and the impending uncertainty of Y2K, the price of gold found itself on a bit of a wild roller coaster ride in 1999. It began the year at $287 per ounce, however, it slowly fell to about $255 an ounce, where it stayed for several months. Then around the end of September, there was a quick spike of the price to $325 an ounce. The price of gold didn’t remain that high for long, as it ended the year at around $290 per ounce.

The obverse of the 1999 Gold American Eagle coin features the design of the renowned artist and sculptor Augustus Saint-Gaudens. It depicts a full length figure of Lady Liberty walking straight at you, her hair flowing behind her, a torch in one hand symbolizing wisdom and an olive branch in the other symbolizing peace.

The reverse of the 1999 Gold American Eagle coin features the design of Miley Busiek. It depicts a male eagle flying towards a nest where a female eagle and her young await the male’s arrival.

This particular coin design is believed by many numismatists to be the best coin design ever. The combination and contrast of the classic and modern design together has proven to be a winner through the years.

If you should have any questions, our Silver.com Customer Service team is happy to assist you. We can be reached via phone at 888-989-7223, online via our live chat, or via our email address.