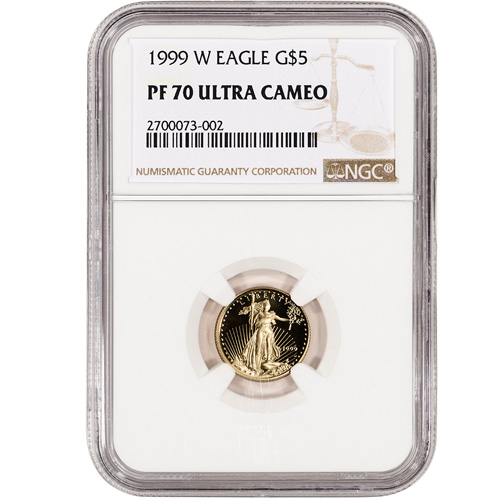 After years of declining demand, the Proof Gold American Eagle coins began a short two-year breakout in 1999. Each of the four coins available in the collection saw increased demand in 1999, but the greatest of these came for the 1/10 oz version of the coin. Right now, 1999 1/10 oz Proof Gold American Eagle Coins are available to purchase online at Silver.com with a perfect certification from the NGC.

Each of the 1999 1/10 oz Proof Gold American Eagle Coins available to you through this listing comes with a PF70 certification. The NGC issues these perfect certifications to coins that exhibit full, original mint luster and a complete lack of detracting flaws on the designs and surface areas.

The included UCAM label identifies these coins as ultra-cameo specimens. Coins with this designation have strong, frosted matte design sets which overlay deeply-mirrored, clear background fields. These combined visual effects give the illusion of the design floating above the surface of the coin.

The 1999 1/10 oz Proof Gold Eagle coin enjoyed the greatest jump in demand among the four coins compared to the 1998 issue of the coins. The 1/10 oz coin surged by nearly 10,000 coins to hit its highest mintage figure since the 1996 release of the coin.

On the obverse of 1999 Proof Gold American Eagle Coins is the image of Lady Liberty. This vision of Liberty was created in 1907 by Augustus Saint-Gaudens for the $20 Gold Double Eagle coins, and it was the first of many new coin designs for US circulation currency in the early 20th century.

The reverse side of the 1999 1/10 oz Proof Gold American Eagles bears the design of an American bald eagle family. This image includes a male eagle as it flies over the nest. In the nest below, a female eagle is depicted offering shelter to young hatchlings.