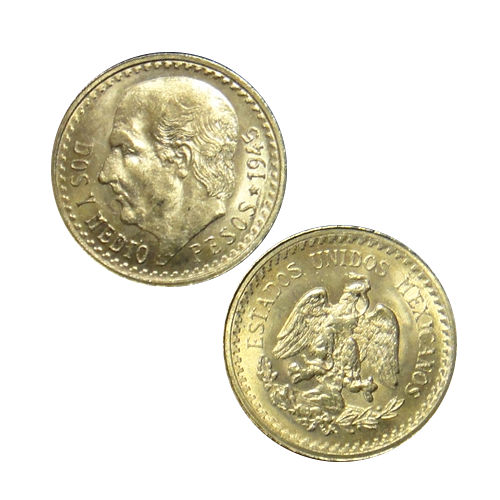 The Mexican Mint has produced gold pesos in a variety of denominations dating back to the early 20th century. Production of many of these coins ceased during the 1970s, but there are still coins available for investors looking for a unique piece of history. The 2 1/2 Peso Gold Mexican Coin is among the world’s most popular coins, featuring imagery representative of Mexico’s fight for freedom against Spain. Today, you can own a 2.50 Peso Gold Mexican Coin from Silver.com in varied years and conditions.

Mexico began celebrating 100 years of independence in 1910, marking a century since the start of its War of Independence. In 1921, those celebrations concluded with the introduction of some of the nation’s most memorable peso gold coins. Among those coins was the 2.50 Peso Gold Mexican coin. The 2.50 peso coin shares reverse imagery with the 5 and 10 peso coins, while adopting the common Mexican coat of arms on the obverse. Each of these coins was minted with .900 fine gold and contains .0603 troy ounces of pure gold.

On the reverse side of the 2.50 Peso Gold Mexican coin is the image of Miguel Hidalgo. A priest and outspoken critic of Spanish rule, he is considered the “Father of the Nation” for his stance against Spain. Hidalgo’s left-profile image is surrounded by engravings of the coin’s face value and year of minting.

The obverse side of this coin has the traditional Mexican coat of arms. In the image, an eagle is seen sitting in a forward-facing position atop a cactus with a serpent in its beak. The lone engraving is that of “Estados Unidos Mexicanos.”

Silver.com is dedicated to ensuring that you are happy with your purchase. If you have questions about this gold coin or other products before placing your order, simply call our associates at 888-989-7223. You can also use our live web chat function for assistance in answering your questions.