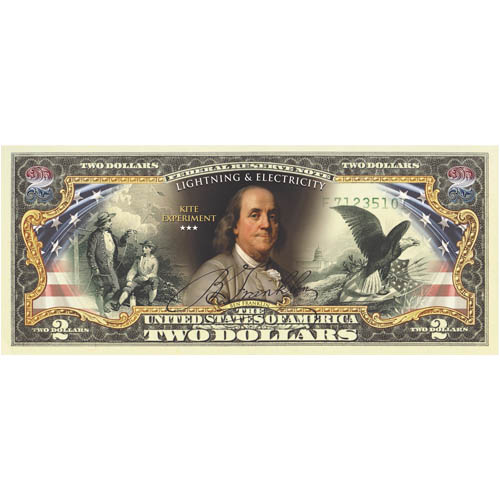 Among the paper notes available in the US Federal Reserve Note Series, the $2 bill is the least used and least circulated denomination. Though it is considered rare by some, the $2 bill is no different in its production and intended use than the $1, $5, $10, $20, $50, or $100. The $2 bill is, however, a favorite among private mints looking to produce commemorative notes. Today, $2 Benjamin Franklin Kite Experiment Legal Tender Notes are available to you online at Silver.com.

The famed Kite Experiment performed by Benjamin Franklin is often credited to two different Frenchmen in the mid-18th century. It is believed that Jean-Antoine Nollet is said to have first developed the idea of harnessing electricity from lightning in Bordeaux in 1749. A year later, Denis Barberet received a prize for a dissertation he wrote on the subject. In 1752, Franklin is said to have actually performed the experiment with his son.

All of these $2 Benjamin Franklin Kite Experiment Legal Tender Notes are available to you in presentation folios. These bi-fold folios hold the bill on one side and come with a Certificate of Authenticity. Each note also has colorized enhancements that have been applied by Merrick Mint using proprietary processes. These applications deliver beautiful visuals and obscure the traditional design of President Thomas Jefferson.

On the obverse of the Benjamin Franklin Kite Experiment Legal Tender Notes is a portrait of Benjamin Franklin at the center. This image is very similar to the current effigy of Franklin from the US $100 Federal Reserve Note. To his right, you will see an image of the American bald eagle with the US national shield. On the left, there is a depiction of Benjamin Franklin alongside his young son as they perform the famed kite experiment. This image is deeply rooted in the history of American currency as this same vignette appeared on the $10 National Bank Note for 30 years between the 1860s and 1890s.

The reverse side of $2 Benjamin Franklin Kite Experiment Legal Tender Notes comes with the traditional reverse design for these notes. Here, you will see a depiction of John Trumbull’s 1818 oil painting capturing the moment the drafters of the Declaration of Independence delivered the document to the Continental Congress for consideration.