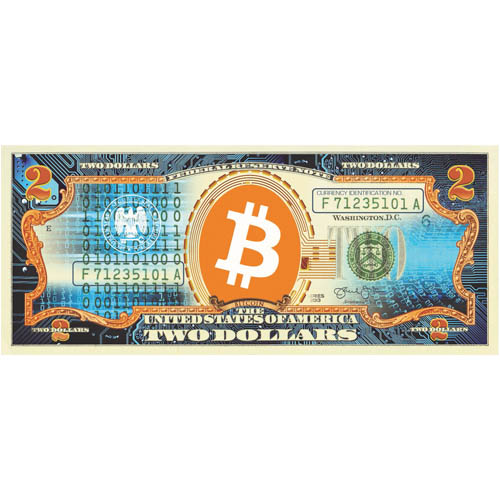 Without question, the dominant form of cryptocurrency in the marketplace today remains Bitcoin. The first-ever cryptocurrency introduced to the world, Bitcoin was developed in 2009 and released for use. Among the first purchases ever made with this all-virtual currency was a payment for pizza. Now, $2 Bitcoin Legal Tender Notes are available to you for purchase online from Silver.com.

The $2 Federal Reserve Note was introduced by the United States in 1976. It was the last denomination introduced in the Federal Reserve Note Series, but it does boast the second-oldest design combination of any American note today. The traditional obverse image of President Thomas Jefferson first appeared in 1928, while John Trumbull’s artwork placed on the reverse first appeared on currency in 1976.

Bitcoin was introduced in 2009. The founder of Bitcoin is listed as Satoshi Nakamoto, but most have come to believe this name is merely an alias for the actual founder. In fact, there is speculation that this one name merely covers for a group of people that all worked under this name while developing Bitcoin.

The obverse of $2 Bitcoin Legal Tender Notes features an image of the Bitcoin icon. Exactly replicating the orange field with a white B from the Bitcoin icon, this design element obscures the portrait of President Jefferson on this side and is accompanied by various other colorized enhancements on the obverse field of the note.

On the reverse side of Bitcoin Legal Tender Notes, you will find the original 1976 design for the note. This side features a replica of John Trumbull’s 1818 portrait of the members of the Committee of Five presenting the Declaration of Independence to the Continental Congress for consideration.

These $2 Bitcoin Legal Tender Notes are available with a bi-fold booklet. This houses both the $2 Federal Reserve Note and the Certificate of Authenticity from the mint. These notes are clean, crisp, uncirculated notes that have been enhanced by Merrick Mint with new imagery and colorization on the obverse.

Silver.com customer service is available to you at 888-989-7223. Additionally, you can chat with us live online or email us directly with your questions.