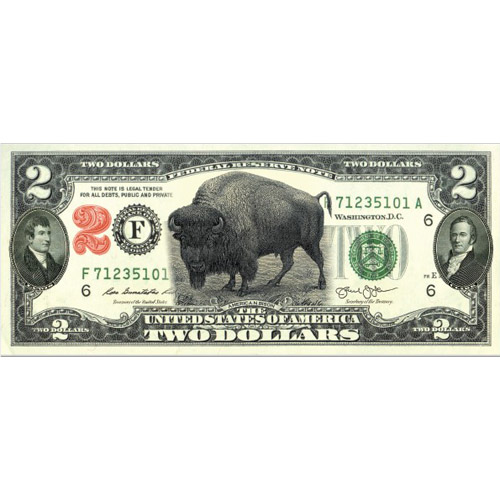 There are many currency designs from American history that have gone down as the most beautiful. For example, when it comes to coins, images of Lady Liberty from the Walking Liberty Half Dollar and Gold $20 Double Eagle are considered the most beautiful on American coins. When it comes to paper notes, the 1901 $10 Bison Note is among the greatest paper note designs the nation has ever created. That design lives on today on collectible legal tender notes. Now, $2 Buffalo Legal Tender Notes are available to you for purchase online at Silver.com.

The obverse side of $2 Buffalo Legal Tender Notes features a modified design on these $2 legal tender bills. The image of President Thomas Jefferson has been replaced by the colorized, enhanced vision of the American bison from the 1901 $10 Bison Note. The image featured a powerful American bison at the center that is flanked by portraits of Meriwether Lewis and William Clark, the men responsible for leading the Lewis & Clark Expedition. While leading that expedition to explore the new lands of the Louisiana Purchase, the Lewis & Clark Expedition encountered the buffalo on the American Plains.

These $2 Buffalo Legal Tender Notes are available to you uncirculated, in clean, crisp condition. Each legal tender note has enhanced, high-definition images imposed on the obverse. The $2 bills are housed in blue folios with a bi-fold design that features the bill on the right and a Certificate of Authenticity on the left.