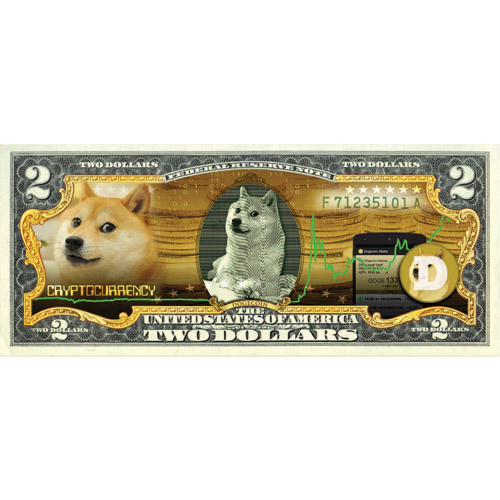 Throughout the latter half of the 20th century and into the 21st century, the American “greenback” has been the most trusted form of fiat currency in the world. Sovereign governments around the world store greenbacks to keep a stable form of currency on hand at all times. Cryptocurrencies emerged in the 2010s as a potential game-changer in the way people hold and spend wealth. Today, the two forms of currency meet symbolically on the $2 Dogecoin Legal Tender Notes available at Silver.com.

Dogecoin is one of the most talked-about forms of cryptocurrency as of 2021. This particular form of cryptocurrency was actually developed as a joke and meant to riff on the Shiba Inu meme that emerged online in January 2013. By the end of the year, Dogecoin was active online and would quickly gain its own cult following within cryptocurrency circles.

All of these $2 Dogecoin Legal Tender Notes are available to you as crisp, clean, uncirculated $2 Federal Reserve Notes. The private mint that enhanced the bills with high-definition graphics picked these notes directly from Federal Reserve packs of new notes. Each note was enhanced using a proprietary process that added stunning, colorized graphics on the obverse. The notes were then packaged inside of presentation folios with an included Certificate of Authenticity from the private mint.

On the obverse side of the $2 Dogecoin Legal Tender Note is an image of the Shiba Inu, a breed of Japanese hunting dog, at the center. This dog was the focus of the “Doge” meme that emerged in January 2013 and it was often depicted using broken English to express excitement in short two-word phrases. The Shiba Inu is featured at the center and on the left, with a representative Dogecoin on the right in front of a smartphone trading app snapshot in the background.

The reverse face of $2 Dogecoin Legal Tender Notes comes with the 1976 design introduced when the $2 Federal Reserve Note made its debut. The design replicates John Trumbull’s 1818 oil painting capturing the moment when the Founding Fathers and other prominent Americans of the late-18th century signed their names to the Declaration of Independence at Independence Hall in Philadelphia, Pennsylvania.

Please contact Silver.com if you have any questions. Our team can assist you at 888-989-7223, chat with us live online, or simply send us an email.