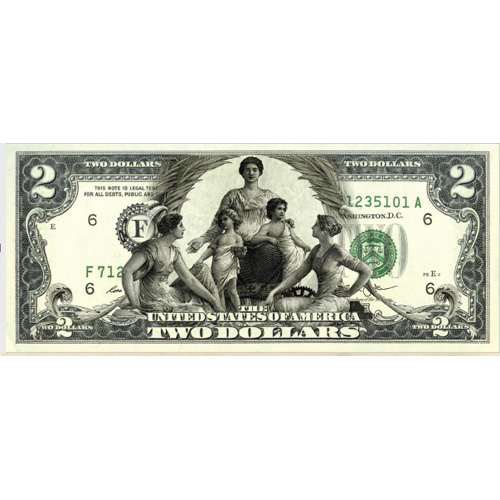 There are various reasons for the popularity of the aforementioned denominations, ranging from the frequency of release to the frequency of redesigns in those values. However, it was the Educational Series of Silver Certificates issued in 1896 that created a lasting impression for these denominations. To this day, the $1, $2, and $5 1896 Silver Certificates are considered by most to be the three most-beautiful currency designs in American history.

The obverse side of $2 Educational Legal Tender Notes depicts the allegory of Science. In this design from 1896, the personification of Science is a mature female introducing two young allegories, steam and electricity, to other mature allegories representing Commerce and Manufacture.

On the reverse field of the $2 Educational Legal Tender Notes is a painting that captures the moment the Declaration of Independence was formally signed by the Founding Fathers. This setting was captured in a brilliant painting from John Trumbull in 1818 and has been the face of the modern Federal Reserve Note $2 bill since it was introduced in 1976.

These $2 Educational Legal Tender Notes are available to you uncirculated in clean, crisp condition. Each one of these $2 legal tender notes is US legal tender that was picked straight from Federal Reserve-sealed packs of $2 bills. High-definition graphics were superimposed through proprietary processes on the obverse to recreate the images of the 1896 $2 Silver Certificate from the Educational Series. Each $2 bill is in a bi-fold presentation folio with a Certificate of Authenticity included.

Silver.com customer service is available to assist you with any questions at 888-989-7223. Alternatively, you can reach out to us online through our live chat and email address features.