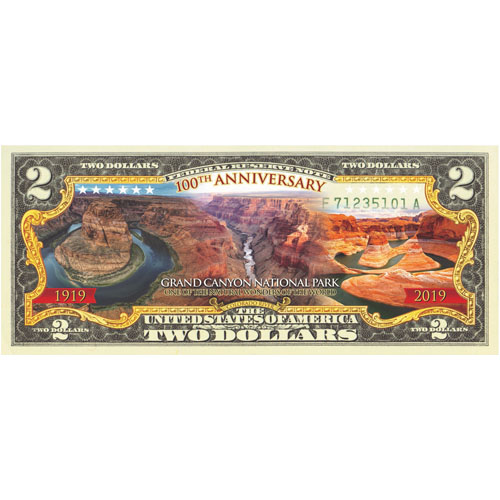 The Merrick Mint has a reputation for creating some of the most beautiful, collectible legal tender notes. Using modern $1 and $2 Federal Reserve Notes, Merrick Mint employs a proprietary process to enhance the visuals on these bills with colorized designs that bring new life to the notes. Now, $2 Grand Canyon National Park 100th Anniversary Legal Tender Notes are available to you for purchase online from Silver.com.

The obverse of these $2 Grand Canyon National Park 100th Anniversary Legal Tender Notes features an enhanced, colorized field with images from the park. In total, there are three separate sites within the park captured in the combined photographic images on this side. The most famous is probably Horseshoe Bend, the site featured on the left of the bill.

On the reverse of Grand Canyon National Park 100th Anniversary Legal Tender Notes is the standard design for the $2 bill. Adopted in 1976 when the $2 Federal Reserve Note was introduced, this design shows the Committee of Five introducing the Declaration of Independence to the Continental Congress in 1776.

These $2 Grand Canyon National Park 100th Anniversary Legal Tender Notes arrive in a bi-fold booklet with the note on one side and a Certificate of Authenticity on the other. These notes are real, legal tender Federal Reserve Notes that are in clean, crisp, uncirculated condition. The enhanced visuals have been applied by the Merrick Mint.