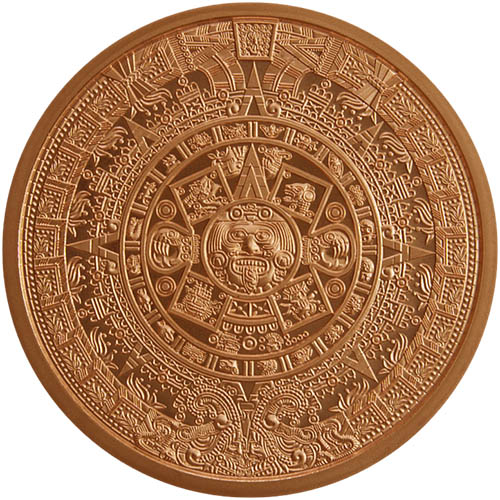 The Aztec sun stone is one of the most historically significant pieces of Mexica culture ever found. Carved into basalt sometime in the early 16th century, the sun stone was the Aztecs means of tracking the days, months, and periods of the Aztec calendar cycle. Right now, 2 oz Copper Aztec Calendar Rounds are available to purchase online at Silver.com.

Each 2 oz Copper Aztec Calendar Round in this listing is available to you in brand-new condition from the Golden State Mint. These rounds ship individually inside of protective flips or with multiples of 25 housed inside of tubes. The Aztec sun stone itself weighs 24 short tons and is 39 inches thick, but you hold its beauty in the palm of your hand with these 2 oz copper rounds.

The Aztec sun stone was carved sometime between 1501 and 1521 by the latter inhabitants of Tenochtitlan, the dominant Mexica-culture city-state in the Aztec Empire. As the Spanish conquest of the empire dragged on through the first two decades of the 16th century, the Aztecs buried the sun stone in the Zocalo, or main square, of what is now Mexico City.

On the obverse side of the 2 oz Copper Aztec Calendar Rounds is the image of the four centric rings and associated designs on the Aztec sun stone. The stone features Tonatiuh, the Aztec solar deity, in the center disk of the stone with four rings around his figure depicting bygone eras in Aztec culture and the days and months of the Aztec solar calendar. The outermost ring features fire serpents.

The reverse face of 2 oz Copper Aztec Calendar Rounds features a left-profile portrait of Cuauhtemoc. The final emperor of Tenochtitlan and last ruler of the Aztec Empire, Cuauhtemoc had the impossible task of leading a beleaguered empire against the overwhelming firepower of the Spanish conquistadors and their indigenous allies.