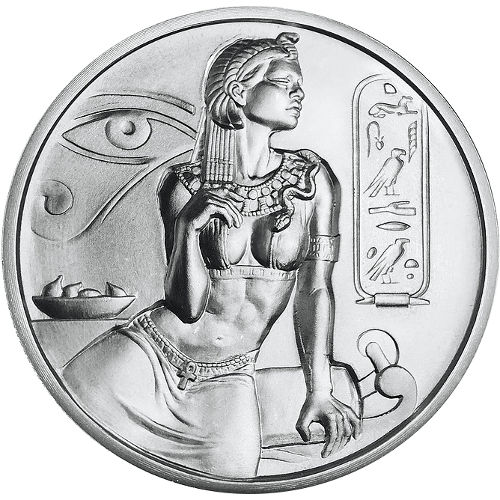 Cleopatra is one of the most written about and well chronicled women from ancient Egypt. She ruled as the last pharaoh of the Ptolemaic Dynasty of Egypt, and was said to be the reincarnation of the goddess Isis. Her image in both rolls is captured beautifully on the obverse and reverse of the 2 oz Silver Elemetal Egyptian Gods Series Cleopatra Round, available now on Silver.com.

Ptolemies were people of Macedonian Greek origin who ruled the Egyptian Empire following the death of Alexander the Great, which brought an end to the Hellenistic Period of Egyptian rule. Throughout the rule of the Ptolemies, the rulers of Egypt spoke only Greek and refused, largely, to learn Egyptian.

Cleopatra originally ruled jointly in Egypt with her father, but when she came to rule singularly, she used Egyptian culture to her advantage. Cleopatra spoke both Greek and Egyptian, and told the people that she was the incarnation of the goddess Isis, known as the ideal mother figure and wife.

On the obverse face of these 2 oz Silver Elemetal Egyptian Gods Series Cleopatra Rounds you’ll find the image of Cleopatra as the pharaoh of Egypt. She is surrounded by multiple items of Egyptian origin, including the cartouche with the lineage of her name on it in hieroglyphs and the Eye of Horus.

The reverse of each of these silver rounds bears the winged image of Cleopatra as the goddess Isis. This image is featured seated in front of a pyramid similar to those found in Giza complex of pyramids outside of Cairo, Egypt.

Each of the 2 oz Silver Elemetal Egyptian Gods Series Cleopatra Rounds is a product of the Elemetal Mint. The mint is a newly formed facility that is the result of a collaborative effort between the former Ohio Precious Metals, NTR Metals, and Provident Metals. It is now the largest private mint in the United States.

If you have questions, please don’t hesitate to reach out to Silver.com. Our customer service team is available to you on the phone at 888-989-7223, on the web using our live chat feature, or via our email address.