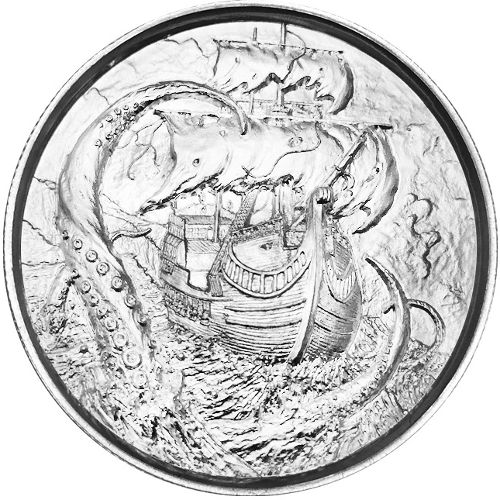 Any quantity available for $11.24 per oz over spot!

Elemetal Mint has quickly made a name for itself producing some of the most in-demand high-relief rounds in the market today. Featuring stunning designs and impressive purity, the Privateer Series combines beautiful design with the entrapments of the pirate life. Right now the latest coin in that series is available, with the 2 oz Silver Elemetal Privateer The Kraken Ultra High Relief Round for sale on Silver.com.

More and more often investors are turning to rounds, and unique designs such as this one, as a way to invest in silver as they are a great alternative to silver bars due to their low premiums over the silver price.

Sailors from the ancient world to the 18th and 19th century swore by the existence of a legendary beast known as the Kraken. Believed to be a giant member of the octopus family, the kraken was first rumored to haunt Odysseus as he traveled home from the Trojan War in Homer’s famous Illiad.

Thousands of years later, Viking sailors making the treacherous crossing from the coast of Norway to Greenland believed the creature haunted the depths of the North Atlantic’s frigid waters. Pirates roaming the warm waters of the Caribbean in the 17th and 18th centuries even feared the existence of the beast and its ability to drag whole ships to the depths of Davey Jones’ locker.

On the obverse of these brilliant silver rounds you’ll find the image of a fearsome Kraken as it grabs hold of a pirate’s galleon. The tentacles of the beast rise higher than any mast of the ship, threatening to drag the ship down in one piece.

The reverse of the 2 oz Silver Elemetal Privateer The Kraken Ultra High Relief Round features the common design theme of all rounds in the series. This includes the image of a skull set in front of a ship’s wheel. The pirate motto of “No Prey, No Pay” is engraved on this side along with the round’s weight, metal content, and purity.

These silver rounds represent the fourth release in the Privateer Series from Elemetal Mint, the largest private minting facility in the United States.

Please contact Silver.com with any questions at 888-989-7223. You can also reach us online through our live chat and email features.